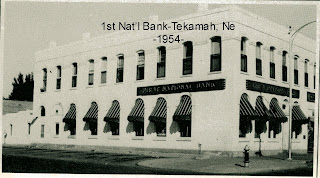 Cliff
That is classic!
Reading this post, I am setting here chuckling. I imagine hearing it the audience was rolling on the floor. Wish we could have been there.
Ralph

Wish all of you could have been at this show - it was a classic. A big "Thank You" to those involved.

Old Blue and his Mate

Great story/tradition and very well told Cliff, do you still have a "Blanche"in town?

Nope Peter, Blanche was very, very old when this took place. Probably about my age.

Excellent, Cliff!!! There's something special about growing up in a small town, ain't they?

I think the difference in your town and my hometown is that half of my town was made up of Mexican people. And if us boys were out being ornery and a Mexican mom hollered at us in Spanish, we understood exactly what she meant, even if we didn't understand.

Anyway, a great piece. Thanks.

Tuna, Texas is a small town similar to Tekamah. It's the sister city of Pancake Flats, too.

You can order a DVD of the play from the Internet. (Blockbuster and Netflix will get you one for a ka-jillion dollars over the retail price.) Let me know if you...

Nice story. I really wanted to go the this program, but with an inch of ice before the skiff of snow made me stay home. Right after we were married and living in Oakland I worked in the First for 3 years.
Sue (Janell's sister/blog the back nine).

I agree with Old Blue - Egg & Daughter Night is a classic. And Blanche may not be around anymore, but there is always someone in town who knows who went where with whom for what and when they will be back.
Let me suggest that you record yourself reading "The Shower Stall" and post it here and on YouTube. If you don't have a YouTube account you can use mine.
And isn't it fun to have my sister Sue, visiting here? She's a good Blogospherian, and has added hitonious to her vocabulary.

What a wonderful story Cliff!! An old radio show..what a neat idea! I wish I could have been there.

Superb post!
I'm sure the show was wonderful!!!
The only thing missing as I read this was a nice, warm cup of hot cocoa.
Congrats to you and to Janell too!!

Cliff
I think Janell might be on to something here. I am learning about podcasting. Perhaps you need to create a podcast and you can add video too. We'll talk!

Ohh, a Cliff podcast! I'm in.
Great story Cliff - I respectfully submit that the next theatre production coincide with Blogstock. Or maybe we could put on a talent show.
Also, do you think it is too late for Dad to parade me around for Egg and Daughter night?

Cliff ~ "Egg and Daughter Night" I have to admit was a NEW ONE on me. I can just imagine, some guy saying, "I'm just here for the EGGS, but thanks anyway!" Not that I would EVER be one of THOSE guys! I'm just saying... ~ jb///

Cliffers, This melted me. Combo of theatre and human connection so poignant! Still, you have me too well trained for the "punch line." WHile feeling all mushy inside for your town's families a small part of me was still holding my breath for you to use "standing ovulation" in some way This time I'm glad you didn't. There's a time for humor and a time for an A+ post like this one.

We went to town there on Saturday nights as a family thing. Yes, Mom called it 'Egg and Daughter Night' too.

I'm glad you posted this.

Thank you Cliff, for your hospitality last Friday. That was a delicious dinner (country talk for the noon meal) you made.

I'm back in the blogging world here again now, and will post for tomorrow some of our visit with the pictures I took there of you guys.
..
BTW, my first car was a green 1950Studebaker Starlight Coupe, it had belonged before to Elmer Cells, your uncle. I bought it used in 1952.
..
..

I missed a great show Cliff - this really sounded like a great time. I love listening to those old radio shows on the internet, again, too (radiolovers.com).

It's posted, Cliff. I don't have a good e-mail address for you.
Will these off the blog be ok till later?
Most are in three sizes.
..

Wow, Cliff, that is amazing. I feel almost as if I was there to watch.

I've heard that Saturday nights in town were a big deal to the folks in the country around here too. But nobody has ever been able to tell the story like that.

I was there -- born and raised. I also worked at First for 2 years. What childhood memories! When I visit Tekamah (rarely), I 'miss' the brick Main Street.