My Latest Article In The Midwest Producer (MidwestProducer.com)

If you're anything like me, you get a little giddy this time of year. Harvest is approaching and we must begin preparations for it. Almost each week of the year brings new duties to farmers and memories of that which happened on this date way back when. When September rolls around, the blackbirds begin their 'schooling up' for a flight to a better clime, the weather moderates and we get that first intoxicating breath of cool, dry, fall air.
My thoughts turn to farm town football this time of year. What a tradition to carry forward for our communities. All across the Midwest the locals have gathered to run and tackle, throw and sometimes 'throw up' during two-a-day practices.
My football career began when I was a freshman. I was a "country school" student through the first eight grades so I had virtually no knowledge of the game save what an older brother had taught me. That and I had learned through eight years of country school recesses that it was a great idea to get rid of the ball as soon as it came into your possession.
I began football as a freshman probably a little bigger than most freshmen, enough bigger that much was expected of me. It was apparent right away that our head coach had great hope for me. Vain hope on his part. Yes, I was big but … that was about it. Our freshman team practiced by ourselves a bit and with the varsity some. I learned to try to act tough like the seniors on the team and still stay as far away as I could from making one of them think I was some kind of threat.
I'll never forget our first game. I had a brand new helmet (special order ... fat head), what looked like a brand new uniform and nicely polished shoes. I had polished my shoes whilst I labored at polishing the shoes of five seniors. The coach always had freshmen shine the shoes of seniors. The seniors got to pick their "favorite" freshman. (Hmmm, five pair, I must have been a popular guy.)
We met at the field house at 6 p.m. We dressed as we had been taught and then assumed the attitude of a really tough guy, but not as tough as the senior boys or for that matter the juniors, but by golly almost as tough as the sophomores. I had an almost sick feeling as I began to get worked up about venturing out onto a field to hit someone who actually wanted to hit me back. I suppose I shouldn't have worried because the reality was I wouldn't be playing, so all I had to do was look the part.
I did what was expected of me. I was dressed about 30 minutes ahead of time and then did what any good freshman would do. I leaned against the wall by the door to wait for our team to run out onto the field and to try to scare the daylights out of anyone who would dare to be on the same field with us.
As the upperclassmen finished dressing, they came up to the front of the building where we were located and we moved down the wall. Since I was the first one dressed I was closest to door but hadn't planned on being first. Maybe second, but for crying out loud a senior should go first. I thought we were ready to go when the coach came out to the middle of the big group but then it got quiet. Very quiet. He began quietly to deliver what was probably a carefully choreographed speech complete with arm waving, foot stomping, fist and teeth clenching, and some swearing. Boy, we were going to have to keep that from our mothers.
What started out as a quiet dissertation on how much time we had spent together and that we had become family through the last three weeks and no one, absolutely no one, would get in our way, turned into a wild and dramatic ending. Nothing ever equaled the crescendo of that speech. He finished by screaming, "Now let's go get 'em." He pounded his fist on the overhead heater nearly knocking it off of the ceiling and the seniors all yelled like they were chasing hogs up a loading chute, then rushed to the door.
That's where I was standing. They shoved me to their left which was the corner behind the door, they slammed the back of it in my face and everyone ran out while I examined the doors backside. My plan to be one of the first ones out of the door turned into dead last. Even the 7th grade student managers beat me onto the field carrying their big bags of footballs and athletic tape.
In spite of trying to play high school football, I still love it. High school athletics is easily the best value for your entertainment dollar, AND you won't need to leave someone a tip.
This weekend, shut down the farm equipment and go watch your local team and cheer real loud, especially for the kid who trots onto the field last. He may have had some recent trouble.
Posted by Cliff at 5:38 AM 10 comments: 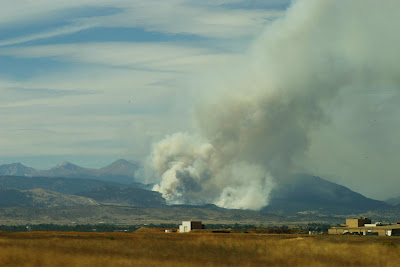 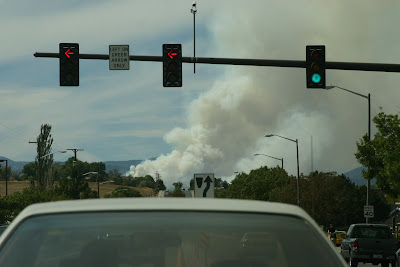 ﻿
﻿We spent part of last week traveling to the Denver area. We stayed with Ralph and Char for a few nights. Marilyn was in preparation for her Dad's 90th Birthday party. These pics were taken on our way up to Loveland for the party on Suday last. It was mostly a grass fire and they seem to have it contained.
We made an overnight jaunt into the Palisade, Co area on Friday and Saturday with all 4 of us. I'll get to that and the party, next. The Campbells are always great hosts with a really nice home. I'm guessing they got up this morning to make sure we were still gone then gave a cheer.
﻿
Posted by Cliff at 5:44 AM 7 comments: