~The older I get the easier it is for flowers and kids to put a smile on my face.~ cm

We're picking corn. We have plenty of moisture. The yields seem good. So I assume I can blame all of this on the President. After all, if he's responsible for the wild fires in California, he must be responsible for the peace and prosperity in the midwest.
I wonder how many of those in Qualcomm stadium will be waiting there for someone to give them handouts a year or two later. After the fires are out, I think you'll find it amazing what a difference getting a job and competent local leadership can make as compared to the Ray Nagin led disaster.
Posted by Cliff at 3:32 AM 19 comments: 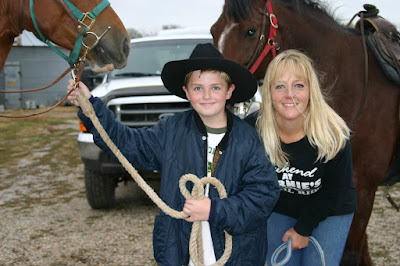 This began as a view from the porch until I yelled "get those hay burners off of that muddy lawn." So they backed up to the road and then I yelled "Hay," (that was to get the horses attention), "Hold your horses," that's when I snapped this pick of my daughter and oldest grandson.
You'll notice that the horses weren't eating anything at the time I took the picture. That might be a first.
The young lad keeps telling Grandpa he loves living on a farm. When I was his age I wanted to own a horse so I could ride like the Lone Ranger. I would have paid anything to get to ride one. Now that I'm older, I'd pay a great deal not to have to ride a horse. So would the horse. So I don't.
On second thought, we have 10 horses, I do pay a lot not to ride a horse.
Back to the Grandson, he's a good, kind hearted, unassuming young man. What you see is what you get. You can trust him but not the horse he's holding.
All of this reminds me of an old joke. The Lone Ranger and Tonto tied their horses outside of a bar after a long, fast ride. Being fearful that Silver(thanks Paul) wouldn't cool down fast enough, The Lone Ranger asked Tonto to run in circles around his horse to stir up some wind until Silver got cooled down.
After drinking a beer, the Lone Ranger heard someone yell "Who owns the big white horse tied outside the bar?" The Lone Ranger said "He's mine, why?" The man then asked, "Did you mean to leave your Injun running?"
(I don't think you can tell that one in public anymore--arrest them, they threw me into public)
Yeah I know, it's been raining for days and I need to get to the field.
Posted by Cliff at 9:56 PM 24 comments:

A Blog In A Picture 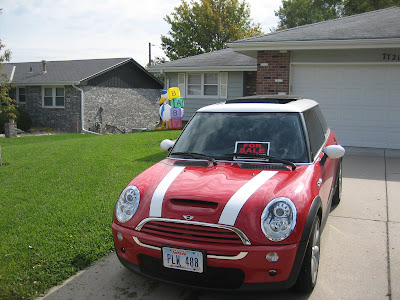 The parents of the new baby sent this funny pic of one of their cars sitting in the driveway. They sent it under the heading 'This says it all.'
If you enlarge it you will see the humor. The backseat wasn't made for childrens safety seats. (or people with legs)
Also if you're looking for a fun car to drive you might give them a call. It's better than perfect condition and $2K under book.
If you are my size, it will make a Christian out of you. Well at least I know that I feel 'born again' every time I get out of it.
Posted by Cliff at 4:22 AM 22 comments:

Views From The Porch 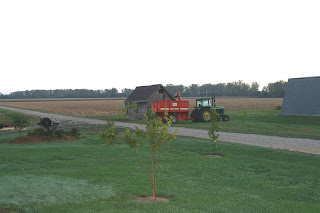 This view from our porch was taken a week or
so ago. It is looking northeast from the house. it shows the cornfield partially harvested. We started on corn this year because the beans weren't dry enough yet and this particualar cornfield was.
The yield was good and moisture 15% to 16%.
15.5% is considered #2 corn and would be the goal. Of course corn never hits the goal. It's either too wet or too dry. But that's farming. Ask any farmer how it's going and we'll tell you we've had 'too' much of something or the other. 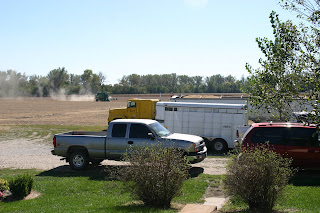 This view is looking southeast from the porch. Marilyn snapped this pic. I like it because it shows a little activity. My brother is running the combine harvesting soybeans. That's the reason for all of the dust. Another brother is running the grain cart. It is barely visible over the top of my tractor-trailer. The grain cart was in the picture above.
The telephoto lens makes it appear that a lot of my 'stuff' is piled up close to the house. That because it is. However the horse trailer isn't hooked to my yellow tractor. It just looks that way. You'd never know that I had a couple of big machine sheds to park stuff in.
Since this photo was taken we have been rained out twice but have finally been able to narrow our soybean acres down to about 80 left to harvest. We've had to leave a few of the wet areas that will have to wait until it freezes over enough to support the weight of the combine.
Our temperatures have been mostly in the 60's with the lower 40's when you first walk outside in the morning. We had a good 'killing frost' yesterday morning. I love this time of year on the farm and in the midwest. I wouldn't want to be anywhere else during October through December. January thru March is another story, I'm taking offers on those months.
Posted by Cliff at 2:51 AM 18 comments: 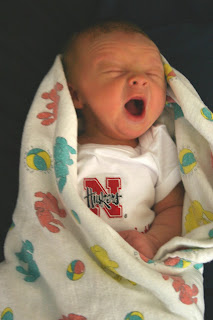 At first it would seem that Hudson Thomas was trying out for Grandpa's church choir or that he was cutting loose with some sort of protest but it's just a yawn. His shirt says: Nebraska Cornhuskers on the top and "A fan since birth" on the bottom. He watched the NU vs Missouri game with his Mom and Dad later that day in the hospital room and didn't like Nebraska being pounded like that so he made them take his shirt off and asked them to take him home. So they did the next day.
He's apparently a sore loser like his Grandpa Cliff. Grandpa had better get used to it.
I think they'll probably wait now to tell him that they have season tickets to the games at Memorial Stadium. They didn't want to upset him further. 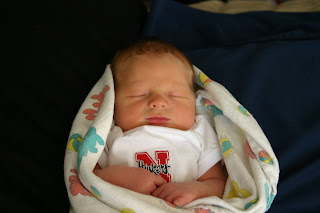 "My father used to play with my brother and me in the yard. Mother would come out and say, 'You're tearing up the grass.' 'We're not raising grass,' Dad would reply. 'We're raising boys.' ~Harmon Killebrew~(Hall of Fame slugger for the Minnesota Twins)
It's a boy, 9# 7Oz. The day long ordeal ended in an unintended C-Section. They couldn't get the big guy turned.
Mom and Dad are well and almost as proud as Grandma and Grandpa.
We'll get to see and hold the baby today. I must say, I've known his Dad his entire life and this is one lucky child. His Dad won't be raising grass either.
Posted by Cliff at 4:16 AM 16 comments:

"Cliff, come to the barn with me, I need help shutting up a sow." "She's carrying sticks." When my Dad would say that I knew that we would be on our way to the unexpected. The idea was to put the pregnant sow in her own pen because she was about to have babies. She needed to be by herself to do this. Having pigs, as we called it, in the open, with the rest of the expectant mothers close by would have spelled sure disaster for the upcoming litter. Hogs have an instinct that sometimes won't allow the very young to survive. The brand new young ones apparently look like a good meal to other sows. When pigs are 'farrowing', (the correct term for having pigs) they go into kind of a trance while they do it. You can walk right up to a normally unapproachable sow. For that reason the new piglets are at risk from other sows until mom comes to her senses. If they survive to the point where mom is awake then they will probably be fine. The mother becomes very dominant and grouchy. Not unlike...oh never mind.
The prelude to all of this was the nesting. Back then we wanted to keep the sows together as long as possible because they could be fed and watered in a group which was much easier. They didn't have any hard surfaced floors to walk on. Even the barn had a dirt floor.
Most sows would begin to build a nest in preparation for farrowing. The nests were usually burrowed out holes in the dirt floor of the barn. The sow would then go outside in search of 'stuff' to add to her nest.
The unexpected I referred to was trying to pen a sow in a place other than where she had started her nest. If we lucked out her nest would already be in a pen and all we would do is grab a gate and some baling wire and wire a gate across the opening. This good fortune seldom happened and then the battle was on. We always got them penned up but it could be a scary activity with a 400 pound sow barking at you while being pushed into quarters she didn't want to be pushed into.
Many years ago every hog lot would be surrounded by trees and a wood fence. Both were a good supply of sticks that the the sows could use for their nests. Within a few hours of farrowing a sow could be seen out in the barnyard by herself, picking up sticks in her mouth and carrying them into the barn. Thus the "She's carrying sticks" warning from Dad.
As my family began to get married and have children, Dad would in his own way ask whether the birth of the next grandchild was imminent by asking "Is she carrying sticks yet?" We seldom had to explain that because the boys in our family knew what he meant and didn't always let our wives in on the farm humor.
I recall coming down to the home place where we now live and telling Mom and Dad about a sudden burst of energy that Marilyn had as she was cleaning the house and the kennel and the cars and everything she could get her hands on all the while being about 12 months pregnant. At least in her opinion.
Dad said, "You'd better stay close to home, it sounds to be like she's carrying sticks."
My children know the story well, and so when I talked to my youngest on the phone yesterday, no explanation was necessary when I asked if Stephanie was carrying sticks yet. "No Dad, but I think very soon."
I know Tom well and guarantee that he's staying close at hand. There will soon be another Morrow.
Posted by Cliff at 4:54 AM 14 comments: