I can now tell you with certainty that not every plate, glass, dish, knife, fork, spoon, paring knife, salad bowl and coffee cup can fit in our diswasher. We tried. I had to run the diswasher to have a salad fork to roll link sausage around in the frying pan and to eat with.
All the stuff will however all fit in the dishwasher and one side of the sink.
I think the next step might be paper plates and bowls and sporks from KFC.
Just last week Marilyn agreed with me that we're too old to be living by ourselves.
Posted by Cliff at 6:06 PM 12 comments:

After a near historically warm winter, we had 7 or 8 inches of incredibly wet snow in early February followed by some fairly light but pesky sprinkles and light snow events. The bigger snow was so wet it would not feed into my 9-foot snow blower. The big augers just rolled up with snow and looked like two large paper towels turning my blower into a rear mount dozer.
We had to just let it melt. It caused quite a mess and we've been dealing with mud for almost a month now. It's been a bad time to need to haul corn the 7 miles to the nearest hard surfaced road. It's not the first mud we've dealt with. This has been a setup for one of the stories that gets rerun about every five years at a Morrow family get together.
It began in the early spring thaw of 1965. Dad, with the help of us boys, would line the north side of the feedlot with a long and high stack of small square alfalfa hay bales. That side of the feedlot was lined with a hay feeding rack made of creosoted posts and planks. We fed hay all winter from the pile and by the time it was about gone we were no longer in need of the wind break the hay provided.
The spring in question was the end of a long winter with heavy snow. The cattle had trampled hay and snow and manure into a hard deep mixture by the hay rack and were in danger at one point of walking over the top. As it melted, the mixture turned into a 'belly deep to a steer' kind of watery oatmeal type mixture. It seemed naturally carbonated and it was about two and a half feet deep. It actually had a base because the bottom wasn't completely thawed yet.
That base was fortunate because the cattle had run out of hay and the mud on the north side of the rack was so deep and gooey, we couldn't haul hay bales in the normal route.
Dad had the solution. We loaded one of our old barge box grain wagons with hay bales. Two layers of bales were squeezed in and filled the wagon to the top of the box sides and then we could hang two more tiers over the edges of the wagon above that. He hooked our 4020 to the wagon because of its wide front and besides it was tall enough to drive in the feed lot with the oatmeal mixture. I would throw the hay bales over the fence into the hay rack while Dad drove along slowly through the slop.
The mix was deep, nearly up to the tractor's oil pan. The wagon axle, wheels and tongue were all under the mud. I successfully threw off the top two tiers of bales across the fence into the feed area, but the first bale inside the box sides didn't want to come out. I had wedged them in and had stomped on them to make them go all the way in. I had him stop the tractor while I struggled to get the bale in the center of the load pulled up and out. My bale hook kept pulling hay loose but the bale itself just stayed in its place.
I took one more hard swing at the bale, burying my hook deep into the middle and with my feet firmly planted I jerked with my legs and the bale came loose. Easily. It popped out of the hole and nearly hit me in the face. I lost my balance and fell backward over the side of the wagon. I firmly hugged the hay bale to my chest as though hugging it would somehow keep me suspended above the cesspool awaiting me.
It was in slow motion from my perspective. I anticipated having the wind knocked out of me. I was prepared to get hurt. Maybe a rescue squad call in the middle of two to three feet of manure would be necessary. I landed on my back with the bale on my chest. It didn't hurt; it was like landing in deep cotton balls.
After realizing I was alive my next concern should have been drowning. The only part of body above wellÉ let's say water, was my head but only from my ears to my chin on up. The bale was sitting on my chest and I was surrounded by 1,000-pound steers trying to lick at me and the bale.
I then realized that Dad was probably worried sick about me. I shoved the bale to the side and took the wire off of the bale so the cattle could eat what parts of the bale didn't sink and then I looked up at Dad. It had bothered him worse than I thought. He was having some kind of convulsions. He had his face buried in his arm which was resting on the fender. He was really shaking, he looked at me with tears in his eyes and put his head back on his arm and shook some more. It almost had the appearance of laughter but he wouldn't do that.
Would he?
Over the years he started to retell that story many times at family gatherings and each time he 'broke up again' and then would look at me and say "You tell it," and then he'd flop his head into his arm lying on the table and begin to shake again. I guess it really was a pretty rough experience for the old guy
Posted by Cliff at 5:14 AM 9 comments: 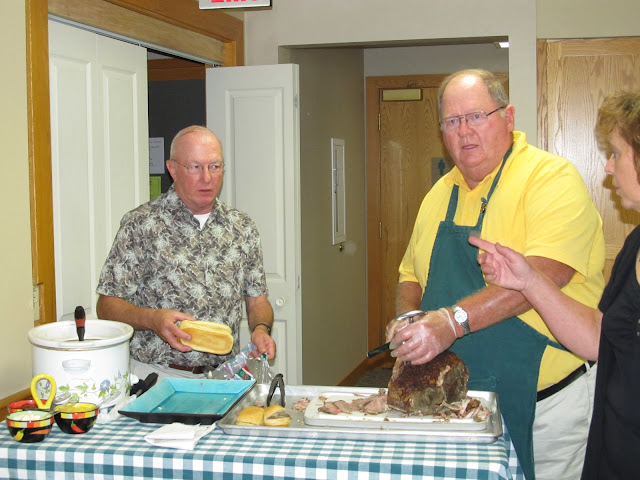 It looks like they're saying...
Marilyn: "Ralph, say that again and that'll be the last French you'll ever dip."
Ralph: "What'd I say."            Me: "Uh...leave me outta this."
What's really going on??... Ralph and I are making beef sandwiches with Au Jus for my Mother In-law's 90th Birthday here in Tekamah.  Ralph and Char, even though unrelated to us, are present for every big family event the Morrow's have which is why they were officially voted into the Morrow Clan at a Morrow Family reunion.
Ralph and I were in charge of the beef sandwiches that day and Ralph had to take over for a while after I tested the knife's sharpness on myself. Turns out the beef was medium rare and I was raw.
Marilyn was just telling Ralph his shirt was out of focus. Or something like that.
OR, write your own caption.
Posted by Cliff at 4:21 AM 9 comments:

Wisdom doesn't necessarily come with age.  Sometimes age shows up all by itself.
Posted by Cliff at 4:32 AM 11 comments: