It's Been A Charles Dickens Year

The following was written for the Midwest Producer Magazine which covers Kansas as well as Nebraska. That explains the mention of both states in the column.
It has finally come and gone. The long awaited day, the very object of our dreams, the goal has arrived for those in drought ravaged southern Kansas and the flooded parts of Nebraska and Iowa and beyond. What day am I speaking of, you ask? It's Christmas, or better yet the end of a long wearisome year. If this was a piece of music the word 'fine' would be in small letters on the calendar signifying the end or as one of my brothers likes to put it, "We finally wore it out."
It started as consequence of a particularly hard fall years back. It seemed that every day another big problem arose. We'd have to figure out how to get a loaded grain cart out of the mud when it had already sunk to its frame. The next day would lead to having to take the duals off of a tractor to clean the mud from between the wheels. Every day was a challenge and my older sibling answered my whiny question about when this is ever going to end by saying, "We're just going to have to wear the year out. Someday we'll wake up and it'll be Christmas and this will finally be behind us.
Well, it's Christmastime and 2011 is behind us and none too soon. It has been a Charles Dickens year in farming - It was the best of times, it was the worst of times. I've talked to farmers from both states who expressed frustration at watching most all of American agriculture enjoying the best of times while others are, or were, hoping for the best from crop insurance companies to give legs to their hope that there indeed will be a next year for them.
The drought continues in Kansas. For those farmers, the drought isn't over, but there might be a bit of a respite while they wait for the hope of next year. Optimism reigns supreme if you're a farmer. As I type this, maybe the snow that is falling in Kansas will start the winter wheat crop.
Without being optimistic and having faith, farmers would be fairly reticent to hide several hundred dollars worth of inputs in the soil on each acre, each spring, without being sent to the loony bin.
We know the plants will spring from the ground in straight, neat little rows. They always have. It's simply too much work to believe otherwise.
The flood is the other story and I'll be the first to admit that I've avoided much mention of what has been the elephant in the room for us. As I've traveled, I am reminded that I have a connection to many folks across our great states of Kansas and Nebraska. It's a connection that is easy to overlook when the product is sent from my computer here on the farm to Terry Anderson's computer and then, well I don't know how it works from there.
I do know magic is involved to a certain extent. But the point is, I continually run in to readers who say something to this effect, "I've been reading about the river in the newspapers but how are you and Marilyn doing on your farm, you never say." 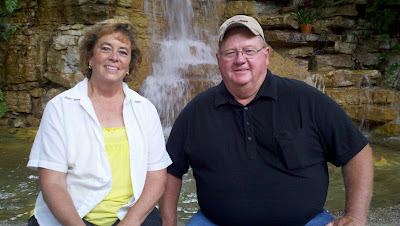 Happy New Years From The Morrows
The short answer is that it is one of those "best and worst" years for us also. The Missouri River has drained back into its banks and we were mostly left with few structural problems except for the trash that was left along the edges. The exception is one field that had 40 acres that was carved pretty badly. About the top 5 feet was washed away. We were able to hire a dozer to smooth it a bit and have worked it four times in four different directions and think the planter will be okay next spring.
Most of the ground I farm is flat. I've never farmed "gently rolling" before but now I have some. We lost another 40 to cutting by the river and sand deposits too deep to do anything with. We were the fortunate ones however. We have good friends who have lost their homes and buildings and some very large fields have hundreds of acres with sand deposits that have rendered the ground of no further use.
In small communities we know the people and the struggles that each one faces. The thing that really amazes me is that these are the same folks who greet you with a smile, a handshake, a question about your own well being as well as an offer to help. Yes, they want to help you when they are the ones who lost their home. The belief is always that it could be worse. Eternal optimists are everywhere in rural America. That's why we live here. It's not for the weather or the excitement of raging flood waters. It's for the people.
I talked to "Bill" at the big farm show in Lincoln. He came up to the Midwest Messenger/-Midwest Producer booth that I was in and looked at me for a bit and then tipped his cowboy hat back and said, "So, you're Cliff?" I admitted that I was. He continued, "I always read your article in the Midwest Producer." I thanked him. He continued, "That is if I don't fall asleep while I'm reading it."
I chuckled a little. He had a good belly laugh about it.
Yeah, it is the people.
Posted by Cliff at 9:17 AM 11 comments:

The Focus At Christmas

Our Baptist church choir has been working on a cantata suitable for Christmas. I believe working on special projects like this, and the one we do near Easter, is a healthy exercise for the well being of the choir, and a church body for that matter. It really helps us focus on what we're doing and why we're doing it.
Way back when I was directing the choir I couldn't help but notice the numbers in our choir would gradually dwindle if we didn't do two cantatas per year. The lesson for me was if you think things are beginning to stagnate, do something, and just get busy. It might be a temporary fix but at least it will be a fix.
For families, Christmas is that way, too. We should focus once each year on the reason we're here. Without that focus, some can become distraught with their family situation. Christmas dinner can turn into a hateful gathering of relatives. We can become lost. If we spend all our time filling the calendar with the wrong types of activities and shopping and the high expectations that this time of year can bring, then we're set up for failure.
Organized activities in churches and clubs and families is a healthy thing, don't get me wrong. The secret is to at least focus on something worth the time spent. Kids would be a good thing to home in on this time of year. Not the toys we plan to give them but a focus on the kids themselves. Give them time. Listen to them, and plan to show them how to spend their time to help others.
I began to notice years ago that immediately following a church service there were always certain folks who seemed to draw children like a magnet. It still goes on today. All of those adults with kids surrounding them have one thing in common: they all get their faces down on a level with the kids. They bend over or kneel down to speak to the youngsters face to face. Try it, it works.
Concerning gift giving, it used to bother me that when my folks reached a certain age, they began answering the question, "What do you want for Christmas?" with something like. "Please don't give me anything; I'm trying to get rid of stuff." "Just come for dinner if you can."
I've now reached that age myself. I know there is an unspoken obligation to give something to your parents for Christmas but really, think about it. I tell my kids, "I'm 61 years old, if I really wanted it or needed it, I've already got it." But stuff is gracefully accepted, I'll admit that I do smell better after I open a bottle of cologne on Christmas morning.
A few years back I received an envelope from one of our children. It simply said, "In lieu of other gifts, a monetary gift has been given, in your honor, to a named charity to purchase food for the needy." I wasn't ready for the instant effect it had on my emotions. It more or less knocked the wind out of me. It was thoughtful and heartfelt and exactly the kind of response Christmas time should evoke.
Don't misunderstand me, the Morrow family's trees will be filled with the usual fare and probably enough electronics to awaken us in the middle of the night and say, "What the heck was that." My wife will calmly say "something needs charging, go back to sleep."
But above all else we need to remember that those folks who are so loved by children that kids flock to them like sheep to a shepherd didn't actually invent the technique of coming down to their level in order to communicate.
That started about 2000 years ago near Jerusalem.
Marilyn and I wish all of you a Merry Christmas and Peace.
Posted by Cliff at 4:32 AM 8 comments:

We've Been Put In Our Place

This afternoon we made the 50 mile round trip to pick up my 91 year old Father In-Law from his senior home, brought him to our house and then later took him to our Christmas Contata presentation. We were pretty pleased with the way it went and thought all of our hard work and  effort had paid off.
He indicated on the way home that he was duly impressed with our choir.
We took him back and he was greeted by a nurse who began asking questions about his day. As we left the building we could hear him explaining what a contata was and that, "It was pretty good, the choir members were pretty old, but they were very good none the less."
I'm not sure why that made me laugh all the way home but it did.
Posted by Cliff at 10:05 PM 10 comments: