John Goerzen has written a 3 part Memories of Christmas blog. It's worth reading and you need to read them in order. Go HERE and go down to number 1 first and work your way up. Great stuff John. Number 3 got to me. I really think you'll like these.
Posted by Cliff at 9:12 AM 11 comments:

Are You Going South For The Winter?

All of my life I've heard that question asked of retired people, or of those who aren't old enough to retire but have the resources (money)to put things on hold and be gone for two or three months. I am being asked more and more, "Going south this winter, Cliff?"
I don't fit either profile so I'm hoping they think I have the cash to do that. I don't. I know the real reason they ask me is that I look old enough to retire. I'm not.
Today at our county board meeting I was asked again. I said, "I'm as far south as I'm going to get." "This is better than Minnestoa or Canada, if I lived there, I'd like to come to Nebraska to spend the winter." It's all pretty relative isn't it. I'm a Nebraska snowbird. I came to Nebraska to sit in the snow.
Wait, I might travel the 50 miles south to Omaha this winter to see my brother. I'll take my clubs.
Posted by Cliff at 9:04 PM 13 comments:

I Hope You Can Spend Christmas Morn With A Small Child!

I'm just guessing but I'm willing to bet that your favorite adults in the whole world have a 'child like' quality about them. They've never lost their enthusiasm for the world, or wonder, or their wide eyed thirst for the unknown. The last few days with my Grandson have been a pleasure. His excitement for life, and Christmas, and Santa, and the gifts he plans to give, and get, are so very heartwarming. It makes you want to protect these young people so that they never find out everything about life.
I asked him if he knew what tomorrow is, and with great anticipation in his voice he said, "Tomorrow is Christmas Eve when Santa comes and then we get up on Christmas day and celebrate the Birthday of our King."
If that doesn't get you excited, then you're officially old. 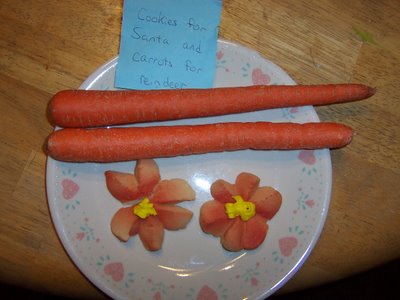 As for me, I'm good either way, I have a pot belly stove with a 'coal burning' grate in the bottom.
Posted by Cliff at 4:48 AM 20 comments:

Our Christmas program was Sunday at Church. Here, the three 'Wise Guys' have just arrived on scene bearing gifts. The gold king on the left is my Grandson. I think the extra King isn't a King but is maybe 'Event Security'. He was bearing a bottle of Enlish Leather...I think.
The Grandaughter below (picture was taken at dinner after church) might be the next Bette M. She can sing and has a tad bit of 'over' acting in her blood. She is a little drama Queen. 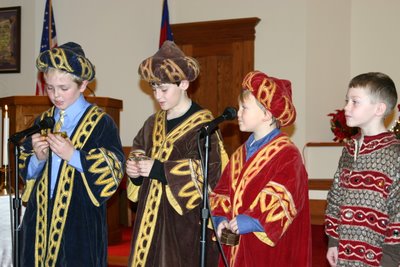 Our vacation stop at Bariboo, Wisconsin and the origins of the Ringling Bros Circus continues. Probably the most striking thing about the stop was being able to see their collection of great, old, circus wagons. The collection isn't entirely of the Ringling line but of many different circus companies. It filled a huge building. The collection was growing even while we toured, they were bringing in more old wagons for restorations. The parade from the railroad to where the circus was to pitch their 100 plus tents, must have been something. Over a thousand people, and over 2500 animals, were in the entourage. They carried along all of the amenities of a small town. Grocery and clothing stores, a bank, a barber, a doctor, and on and on. I read a list of the rules and terms of employment and they ran a very tight ship.
I think you'll find the bottom picture of particular interest and worthy of 'clicking on' to enlarge. It is a close-up of one of the wagons and it shows the exacting craftmanship and, well, 'the beauty' of their work. 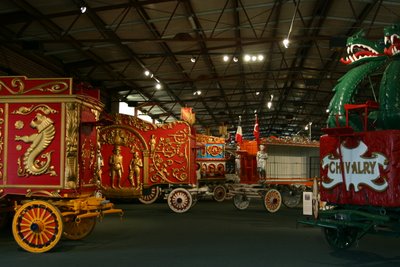 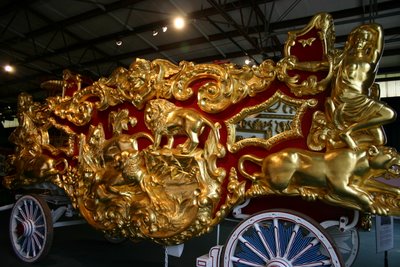 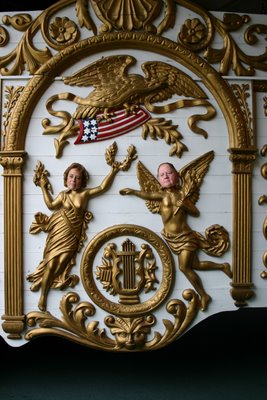 I have sat down at my computer, 3 times in the last 2 days. Each was a time I thought I had the time to visit your blogs. I did. I was not successful at leaving comments. So I will now give you all a comment. "Stinkin Blogger."
I have no reason to think that this blog will work but here goes anyway. 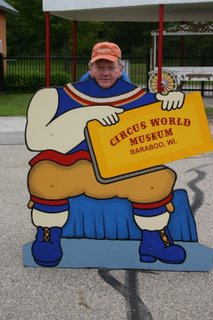 Can anyone guess one of our vacation stops
from last summers trip?
That's right!! Smart people out there.
It was the original home and winter quarters
of the Ringling Bros circus. 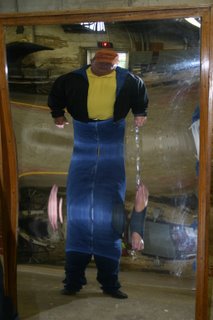 Finally, a picture where I look normal.
Camera's always seem to add about
100 pounds to me.
At least I've always felt that way. 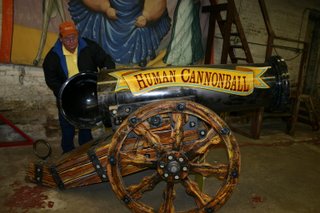 They were looking for a replacement
for the Human Canonball.
They said however, that they weren't
exactly looking for a man of my caliber.
This was a neat place. I will post some
more pics from there with better subject
matter.

Why Can't A Woman Be More Like A Man?

That song that is discussing the way women think, in My Fair Lady, is a back and forth between Prof. Higgins and Pickering. The thoughts of that song and our high school production of it, recently got me in trouble.
Marilyn and I went shopping in Omaha last week. Something I will normally avoid like the plague. Especially since she was going to buy fabric for curtains. Let me say here that fabric, still on the bolt, in large quanities, has the same effect on me as kryptonite has on Superman.
BUT, she was going to buy some lumber to add to the window to aid in the curtain hanging and I wanted input on that part because it would surely involve me.
So we came out of the store and I was totally drained. I crawled to the car on my hands and knees to begin my recovery. As we got in and headed toward the interstate Marilyn made a movement with her hands and arms that indicated to me that she had forgotten something. And she had, then she said, "But just forget it I'm coming down next week and I'll get it then." Frustrated with herself she continued, "Man, I'm getting stupid-er as I get older, what am I going to do about it?"
So the above song hit my mind and I thought this was an opportunity to have a little fun. "You need to learn to think like a man." I confidently advised.
Turns out that the preceding statement was akin to firing across the bow of the U.S.S. Constitution. Not wise.
We drove silently for about 3 minutes and as we merged onto I680 North I could feel her eyes boring a hole in the side of my head. So I said what any intelligent man would say.
"What?"
"Oh nothing," she said, "I'm just undressing you with my eyes." Then she said, "Wanna take a shower with me when we get home... I'm just trying to think like a man?"
Here she stares again and then continued, "There, I feel smarter already, do I sound smarter?"
Upon further review I think she could have selected the lumber by herself.
Posted by Cliff at 8:50 AM 25 comments:

A View From The Freightliner 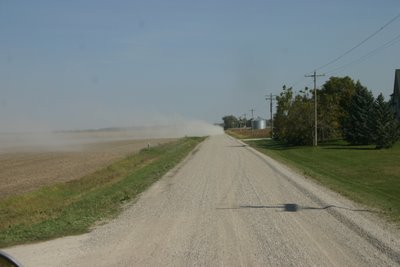 This picture was taken about 5 weeks ago during harvest. It is the 'two mile road' aka County Road E. I've taken it 9 miles to and from town for 56 years now. Sometimes daily, sometimes many times per day. I'm heading east here with a fairly strong south wind it would appear. It looks like another truck a half mile ahead stirring up dust. Marilyn's kennel operation is ahead and on the left. Our home is 3/4 mile south of there down a private drive that looks similar to this road.
Mostly I wanted to show you what I must battle during rush hour. I hate it when someone else uses the same road that I do.
Conference time for county officials, see you late in the week. Stay safe!! I took a count just before I left and hope you're all here when I return.
Posted by Cliff at 9:51 AM 20 comments:

Self Important At It's Finest!!

Danny Devito has been on theView and thus Rosie O'Donnell's lap ( they claim that could be??). As of late. I don't/and would never consider, watching that show (The View that is because of O'Donnell).
Then Danny was on Letterman. I crossed that show on the way to watch Jimmy Kimmel. I caught DeVito walking on stage to a warm greeting by Letterman who of course would be Very Impressed by this tiny little man. I quickly changed the channel before they started their little lovefest.
Did you know that Letterman, Rosie, Devito and myself all have something in common. Well here it is. In the grand scheme of life,,we are all totally, completely, and without equivocation, very insignificant people. The problem is that 3 of us don't know it.
Posted by Cliff at 8:55 PM 14 comments: