How Long Does It Take You To Harvest?

﻿That question pops up from time to time. Of course farmers wouldn't ask that. We know the question is akin to asking how much rain do you usually get or how big are the fish you catch. Harvest depends on stuff like weather and the amount of bushels you have to harvest.
Now, at the end of 2010, I have the answer.  We finished in record time on October 22. Exactly 3 weeks and 2 days after we started. We didn't have a day off because of the weather. That's a first at least on this farm as far as memory serves the harvest crew I work with. And my harvest crew consists of two brothers, Ed and Francis, who go back as far as the family has been on this farm (1948) and I go back to 1950, the year I was born.
I've mentioned I use this blog sometimes for my own reference or diary if you will and so I wanted to remember a few things.
1. A wetter than normal planting season and we didn't get everything planted because of the Missouri River.
2. A REALLY wet summer that included 17 inches of rain in June, July, and August. It was the second year in a row that we never even started one of our 6 irrigation wells.
3. The fall weather was so great it was almost unbelievable. No rain, cool bright days, chilly nights, not much wind. Deep breaths of the morning air has been almost intoxicating to this farmer. I loved it.
4. The yields where there was a little altitude, were good but the low spots were zero. We had whole farm averages of corn go from 227/A on corn down to 33/A on another farm where the drainage was poor and down to zero where it never even got planted. (good thing too as it was still under River water at harvest time.
5. It's now November 16th, our field work is completely done and the equipment has been bathed and put away. I have mounted the snow blower on one of the tractors and now will begin work on certain pieces of equipment for next season. I'm waiting for bad weather but hoping we won't get snow this winter. Yeah, right.
For this farmer this year has been historic in many ways. Some cell phone pictures follow.
The biggest event of the year was the miraculous survival of our daughter during her pickup crash. I'll cover that on the next post. 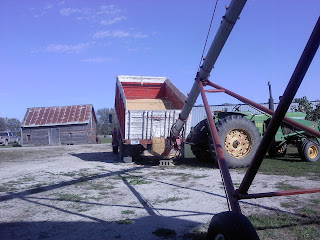 Loading a bin, using our old truck for a gravity box. 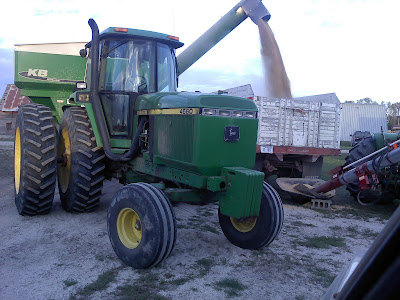 Brother Fran bringing in a load of soybeans he got from the combine. This picture is squished up and I don't know why. 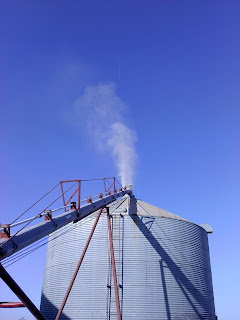 I was loading a bin with the fan running on the bin. We got into a 'white cob' vairety and this was the resulting chaff blowing out of the bin. This usually happens but it's easier to see white. 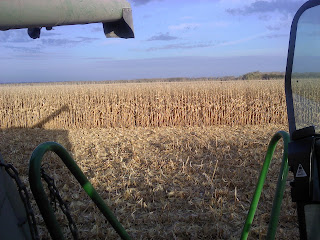 I opened the combine door one afternoon while I was waiting for the grain cart to come back so as to enjoy the view, and that more of that great fall air.
Posted by Cliff at 4:42 AM 14 comments: