You Decide Which Is Which

One of these pics of the gauge cluster on my Allis D-14 is before the boys painted it, and the other one is after they painted it. Can you tell which is the before pic?
I'm going to have a tiny decal made that says "Spooky Old Allis" and place it on the front end of the hood. If you can tell me where that comes from without looking it up, then you are officially old. 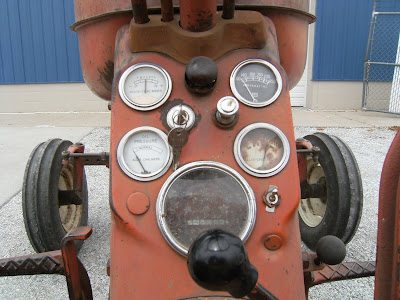 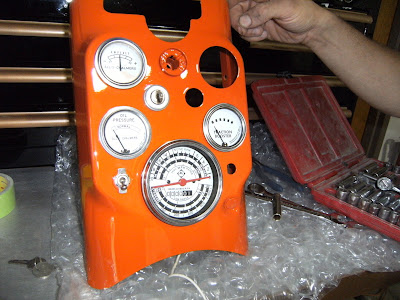 View From The Porch And More

We've had 15 plus inches of rain since the beginning of June here in southeastern Burt County. I quit keeping track at the 13 1/2" mark. Keeping that in mind, it's not unusual that Marilyn could snap this pic from our front porch a few days ago. It's a common sight.
I think the 15 inches of rainfall this year will be averaged with the zero rainfall for the next two Junes to give us something to hope for. 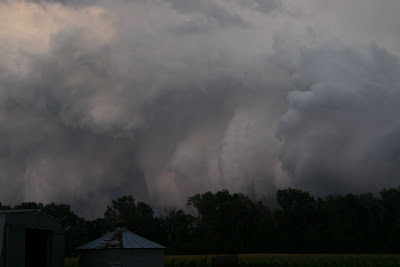 Below is activity at Morrow Collision Center. Son Tom is seen here apparently hiding behind my 1958 Allis D-14 farm tractor. What he's really doing is applying a coat of primer to the sand blasted frame. The picture after that, was taken later that day. It shows the same tractor in all its freshly painted glory. 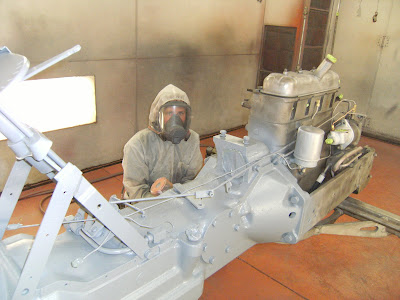 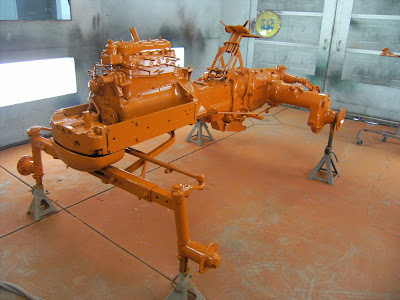 A Conversation In The Car

On the way home from Church we had our seven year old Grandaughter with us.
Grandma: Casey, do you want to go to the shower with me at church this afternoon?
Casey: What? (said meaning, "What are you talking about?")
Grandma: You know your Sunday School teacher?
Casey: Yeah
Grandma: Well her daughter is getting married and we're giving her a shower today in the church basement.
Casey: What?
Cliff quietly aside to Marilyn: Uh you should explain to her what a bridal shower is.
Grandma: You see Casey, when some girl in our church is going to get married all of the women in the church get together to give her a shower.
Casey: Oh GROSS! (pronounced GaaaROSS)
Give me credit here, I kept it on the road.
Posted by Cliff at 1:50 PM 13 comments: 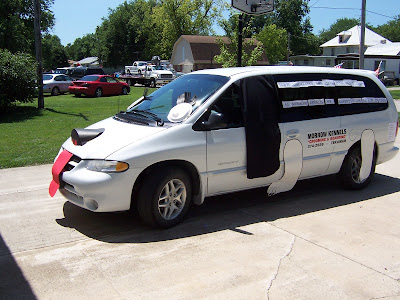 Addendum: Above is a picture of the float as requested.
Putting a float in the town's parade seemed like an obligation five years back. Our town was celebrating the tour of the Lewis and Clark Expedition through our area just 250 years prior. My wife runs a boarding and grooming kennel and when she fights the urge to deploy a float in our local parade, she will get questions like, "so, I didn't see a Morrow Kennels Float in the parade, did I?" From past experience, we know that a float, when properly prepared, is a joy to both behold, and to drive proudly down the street. People cheering, and you flinging candy as though you had been paid off by a Dentist. It's best to plan the float well in advance, gather the material to do the job, and then casually, over a week (the one before the 4th) put it together. There you will see the fruits of your artistic expression merge with physical talents into what surely will be a winner. Something, when seen by certain people in Pasadena, will put you on the fastrack to a permanent assignment there on New Years Day. Then reality sets in. On the Saturday morning, the 3rd of July of that year, my wife said "I want to put a float in the parade, for a change". The tone in her voice told me a float was in our near future. I said, "If you want a float, then we will make a float". I didn't realize until right then, that she had watched the movie "Dumb and Dumber", once to often. She wanted to make the Caravan look like a dog. At about 6 PM she starts. A dryer vent pipe covered with black cloth for a tail. Good. A red piece of construction paper sticking out from under the hood was a tongue. Good. Two large pieces of black cloth hanging out of the doors for ears. They did look more like large sunscreens. Four legs, white, outlined with black, taped to the side. Looked like two pieces of cardboard taped to the side of our van. Then she had a black garbage bag stuffed with trash, and taped to the hood. I said "what's that". She said, well actually screamed "It's a nose, what's it look like". Thinking back, I shouldn't have said "a black garbage bag stuffed with trash, taped to the hood of your van". I was able to duck the magic markers flying my way but she got me with the nose. Then I had to help remake a nose. Which with my help, I must admit, ended up looking like a piece of black construction paper, bent and taped to the hood of the van. It was time for me to put my talents to work. "Go make some signs for the van, and be sure to tie it in with the Lewis and Clark theme", she said. I already had an idea, but I was missing one important number. I thought I could get it off of the internet, which I did at about 2:30 am on the 4th of July. The number turned out to be 190. The sign read: LEWIS AND CLARK'S MEN ATE 190 DOGS IN 2 YEARS. WE AT MORROW KENNELS, HAVEN'T EATEN 1 DOG IN 25 YEARS. She heard some laughs, and a few young girls say "Oooh, poor dogs" Others said "I can't believe you actually put that on the float". I think all in all it was a successful float. I’ve been able to watch the parade from my Mother in-law’s yard since I made that sign.
Posted by Cliff at 5:15 AM 19 comments: