A Celebration of Life...

is occurring over at 'gette's. The long battle is over for her MIL. I know enough about 'gette and her family to know that this will truly be a celebration by a very strong and faithful family. But still, our condolences and prayers go out to all.
Posted by Cliff at 8:57 PM 3 comments: 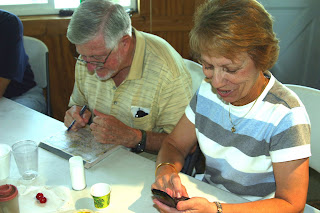 This is Jim at our Saturday morning Blogstock breakfast. He has already eaten and is looking at his maps for an inside passsage to the Pacific thinking that Lewis and Clark might have missed something after they passed by where our house is now.
Mrs Jim is phoning his Doctor to say he is "hearing those voices again." 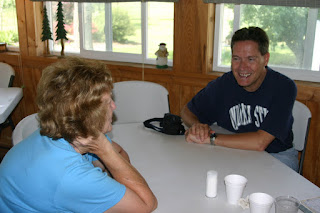 This is Jerry trying to convince Rachel that he doesn't just work for that big oil company in Houston, he actually owns the company.
Inspite of his boyish good looks, Rachel was just nodding her head in agreement while occasionally looking around the room to smile at others and see if there maybe wasn't someone else to talk to. 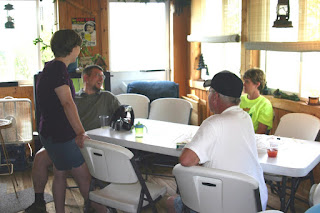 This pic is also taken in our sunroom/porch/deck or what ever it is we call it.
It's a rare photo. It shows John and Terah visiting with Char and Ralph. It is rare because John isn't out chasing Jacob through the corn and it shows Char and Ralph together in the same room. After perusing all of my Blogstock photos as well as all of Ralph's, this is the only one I found with them together. That is mainly because they seem to be working constantly. You need to be careful what you wish for outloud around either one of them because they will go get it or do it or build it or stack it or buy it or have it shpped in. These two are good people and great friends.
NEXT: Jamie Dawn tries to steal a baby and More.
You may not have escaped after all.
Posted by Cliff at 3:37 AM 13 comments:

Birth of Another Article

This is my latest article written for the Midwest Producer. I've had it in my brain for over a year and it finally spilled out onto the screen.
Off to the right side of that piece is a listing of other articles. Most notable to you who attended Blogstock is one written by my friend and boss and Editor of the magazine Terry Anderson. He was also my singing partner at karaoke at Kieffers. Help him out a little and click around the site. Some good agricultural information free for the reading. The storm that Terry speaks of is the same storm that hit LZ's place and which he wrote about a while back.
Posted by Cliff at 9:34 PM 13 comments: 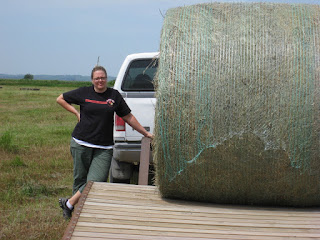 The condition of the farmstead has taken a backseat to irrigating corn since Blogstock. The lawnmower and weed eater have been tossed aside like a winter coat in July. We had 9 tenths of an inch of rain two nights ago. That really helped with the irrigating.

Some thoughts on Blogstock. Ralph and Char and Desiree and Rachel were here early to help get ready. They mowed and made cherry jam and parade floats and Blogstock welcome bags, and helped put up hay, and the tent, and washed dishes over and over and over again and add infinity and nausea.

This really happened: On Friday morning I got up in a bad mood. There was no particular reason for my mood but I was just really tired from throwing hay bales in the heat. Ralph had been here five nights already and as I emerged from my bedroom on the way to the bathroom I came face to face with Ralph. Neither one of us felt like smiling. As a matter of fact we both had a 'mean' look on our face. Our guest Ralph broke the ice with, "You know what? I'm getting really tired of getting up every morning and finding you still here." It was right then that I realized that it was time for Blogstock to get over with. Ralph was getting to comfortable.

The picture is of Desiree. Ralph and Char attended her Baptism in Illinois and then brought her to help us get ready for Blogstock. This is one talented, and hard working girl. She rose to the top of my list when one of her first jobs was to drive one of our rigs with 4 big round bales on it. We had nearly three miles of uneven roads to navigate and I had loaded it improperly. The bale on top looked like a big water baloon sitting on a teaspoon. She had only gone about twenty yards before I realized the girl knew what she was doing with the trailer. She has 'the touch' when it comes to pulling big loads that could spill. She made it without incident.

She also taught me not to carry an empty Morrow Kennel cup into the kitchen for a refill. It will be snatched out of your hand and into the dishwasher before you can say, "Uh, I was going to get more iced tea." She works fast, and hard, and appears to be tireless. Juli and Desiree and Ralph helped pick up several loads of small square bales also. Those two young ladies were great. Ralph and I tried to stay out of the way.

Ralph and I built the frame for the float trailer and then turned it over to Desiree to ram rod the decorating. Ralph said we needed to designate her as the 'point' on this project. I told Ralph we don't have 'point' people on farms in Nebraska. He said if we were going to get the job done there was going to be a 'point'. Anyway, she was 'in charge' of decorating and did a great job.

Rachel was doing a lot of everything. We told her she could be a pit person and after her initial glee from thinking she was going to a NASCAR event, we showed her where the cherry trees were. She picked and pitted and made jam like a pro. Rachel is low key and polite and really handy around the kitchen. Everything I'm not. She was also tireless and this wouldn't have been pulled off without her.

Next: Ralph and Char

may recall these two Grandaughters shown here ready to donate to the Blogstock float. They are soon to be four years old Madi, and two year old Allison. 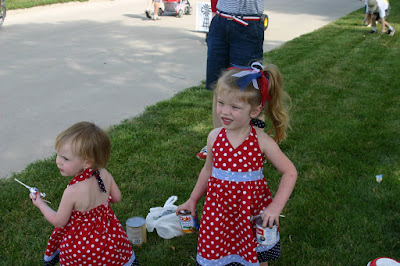 Yesterday while riding in the back of Dad's car in the city the following conversation took place.
An old beater of a car smoked past them and...
Dad: "Ewww, someone has a stinky exhaust."
In a 'matter of fact' tone Madi said:
"It's Allison."
Posted by Cliff at 7:55 AM 19 comments:

For all of you folks from the area who read this blog, I'm going to list the Bloggers (in order from top to bottom) in my blog roll at left, who attended Blogstock 08. They all have nice articles written about Tekamah in their blogs. (Except son Dan. His likely won't be written for a month or two)Just click on their names.
Those attending were:
Dan Morrow
Ralph Campbell
Terah Goerzen
John Goerzen
Jamie Dawn
Wiley or Jerry aka. Jerry Wiley
Rachel
Nora
Jim
Lazy Blogger
Janell
Desiree in Normal.

To you bloggers: The local paper has hit the racks and we were mentioned three times in this edition.

We were mentioned at the beginning of this staff written article.
And a nice picture of Nora appeared with a nice mention of Blogstock and how Nora, Ralph, and Jerry made the trip to town to donate every thing to the food bank. Jerry says he doesn't remember making the trip but we all know he did.
Ralph wrote a nice thank you to the citizens of Tekamah for their generosity. It's in the hardcopy but I can't find it in the online edition.
I'm still pressed for time but this should keep y'all busy for a while.
Posted by Cliff at 8:54 PM 11 comments:

Hold on a Little Longer 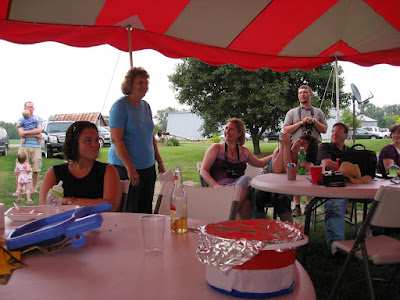 I have a lot of folks to thank.
Blogstock didn't get over...we just wore it out.
I have some things nipping at my rear so will start with a few gathering pics and comments in a few days. I have some meetings that require my full attention and I'm cooking chicken for 60 tonight at the CC. But after that.
Until then, stare at the picture. It's a picture of Rachel giving another one of her lengthy speeches. (Just kidding Rachel)
Posted by Cliff at 5:25 AM 17 comments: