The Week That Was

We had the Memorial services for two of my aunts this past Saturday. They were the last of many aunts and uncles. They had passed on over the winter and the memorial services were postponed until Memorial weekend and thus better weather.
We saw relation from all over the country because of those two services and also because of the local alumni association always holds their alumni banquet on the Saturday preceding Memorial Day.
So, we had family in from OK, NM, MD, just to name a few and several from Nebraska. The farm looked like a used car lot on Friday night.
Saturday night Marilyn and I attended the 40 year reunion of the class of 1968. There sure were a lot of old folks there.
I knew a lot of them amazingly well considering they are all a lot older than I. They've become senile, evidence the fact that some in that class thought I was old enough to have actually graduated with that class.
By the way, can we all agree to drop the question, "You don't remember me do you?" from our vocabulary?
If you'll do that I'll agree to stop saying, "Yeah, you're the girl who wouldn't talk to me in algebra class."
Just kidding here. I can't think of anyone who wasn't friendly to me in High School. Remember, a girl who is friendly and one who will actually agree to going out on a date are two different things.
Since we last talked we've had a lot of rain. I think. Every time it rained I would only get .40" It rained all night Thursday night and all of my neighbors got around 2.5" and I got .40" again. Being the CSI type, I brought the gauge in and filled it to the top of it's 6" capacity and leaned it in an upright position in the sink. When I came in at noon I once again had .40" I learned the gauge leaks AND I now know approximately how far up from the bottom the leak is.
I also have an electronic gauge that I can read from inside of the house. It recored zero. I'm thinking the national weather service won't be calling me for information.
The storm on Thursday night took down some spans of the big transmission electrical line west of me and several irrigation sprinklers in the area were upset. A few outbuildings on area farms were also destroyed.
The most damage we have sustained have been wind damage to my pickup, an upset grain auger, and we have water sitting in many fields.
I recently purchased a new lawnmower with a 72" deck and almost have the first set of blades worn out trying to keep up with a lawn that seems to get several inches of rain per week.
Later, I need to go mow.
Posted by Cliff at 10:16 AM 23 comments:

As sobering as the above title may be, please stick with me here.
Corn:
It's planted and for the most part out of the ground.
Beans:
We have them planted. Some are up and out of the ground.
Question:
If we say "I have the beans planted...then why don't we say I have the corns planted."
OR... why not say, "I have the bean planted already."
I've been to a lot of meetings as of late. Some were good.
We're having quite a few relatives here for this next weekend.
My richest relatives are coming. The ones coming are able to buy gas and drive a car.
Show off's...I tell you.
SHANNON: If you get a chance, stop and see Shannon. As you know I'm pretty descriminating when it comes to the blogs I will read. I like reading Shannon because she seems to have a good grasp on the worth of family. She doesn't spend time complaining and trying to save the world and gives us a different topic on each post. I think you'll find her family, farm life, and great photo's offer a good look into her daily life. Thanks Shannon, for blogging.
Posted by Cliff at 8:37 PM 15 comments:

I believe God puts certain people here among us to show us all how to act. Nora is one of them.
It was Nora's birthday today (Monday the 19th) and she spends most of her time doing nice things for other people.
Stop over and wish this class act a Happy Twenty Ninth Birthday.
She seems younger than that however.
Posted by Cliff at 10:45 PM 6 comments:

A high level meeting (one mile high to be exact) of the Blogstock '08 planning committee took place recently in Denver. Here 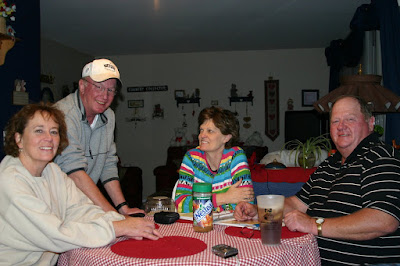 is another picture of Ralph having more fun than everybody else. Char (center) is his lovely wife. Marilyn and I are the two on the outside. Many ideas for Blogstock were thrown around but as per normal the women vetoed all of the really good ones.
At least Ralph and I assumed that the words, "over my dead body" were to be taken as a veto. 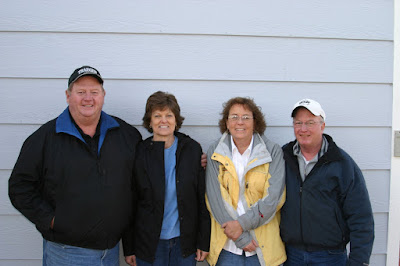 We left Denver with peace and harmony prevailing.
We have a long running series of these pictures. We always take them on Ralph and Char's front porch just before I utter the words that show I'm a farmer. "Get in the truck woman."
Then I say those other words I'm famous for. "Just kidding Dear.... shall we go now?"
Posted by Cliff at 8:37 PM 20 comments:

This was the day I planned to finish planting corn. The heaviest ground I farm was just about dry enough to plant and I was going to force it a bit. But alas it is raining on this fine Saturday morning. It is supposed to rain all day. A 100% chance all day as a matter of fact. Fifty eight degrees for a high temperature with a high wind warning later today.
This day seems to be making the same sound as the hose attached to our central vac system.
Have a lovely weekend.
I'll be around to visit in the next couple of days. There will be a white glove test so be sure to clean above the windows.
Posted by Cliff at 5:52 AM 19 comments:

I'm On The Governing Board...

of our local senior center. It is a well run institution. It is that way because of all of the volunteers that help in every aspect of the program and facilities. They give selflessly when ever asked to do something by our director or staff.
This week is Volunteer Appreciation Week.
In that light they decided to have a party this afternoon to honor and thank all of those volunteers. They asked me to speak/entertain. I did. It went well.
But now I just don't know how much to charge for doing that. : )
An Addendum: I woke up yesterday morning and at 4:30 AM sat on the edge of our bed and began quietly chuckling about this potential blog. Marilyn wanted to know what could possibly be funny at 4:30 in the morning. I told her what I was going to write. I said "Get it?" "Charging to speak to volunteers?" As she drifted back to sleep I heard her mumble "You are a sick man."
Oh well. You guys could have told her that.
Posted by Cliff at 5:28 PM 27 comments:

The soil has finally dried enough to start planting. I have just enough knowledge to use my new planter monitor. I hope to have it figured out by the time I'm done planting.
Rain and Thunder storms are expected this afternoon through tomorrow evening. I'm going to the field now and expect all of you to behave while I'm out.
All Skate!
Posted by Cliff at 3:35 AM 10 comments: