I have several local readers to this blog. One has commented a very limited number of times over the years but he and his wife keep up with me and few of you quite religiously. His name here in the blogosphere is 'Blue' (the local baseball umpire who is without peer) and his wife Mrs Blue. I first wrote about him HERE. I reread the comments and see that this post was the first time my good friend Paul visited my Blog.
We had golf league tonight and Blue was on the committee to do the cooking. He brought a pan of bars that were... well, shall I say very, very good. He credited Mrs Blue with having made the bars and this blog post is a shameless attempt to get her to post the recipe in the comments. If she does, it will do you all well to retain the recipe and then make the bars the next time you are attempting to get your spouse to do something they don't want to do. A word of warning, don't waste these bars on something like convincing someone to take the trash out. Instead use them for something big like a cruise, or a visit to a foreign country or possibly as a way to get a new house built complete with 4 bedrooms and 3 and 1/2 baths. Or...well, you know.
Posted by Cliff at 10:37 PM 17 comments: 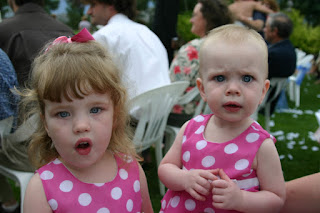 A vicious rumor circulated thru the crowd at the wedding. There reportedly wasn't going to be any cake at the reception.
It was the cause of much consternation. 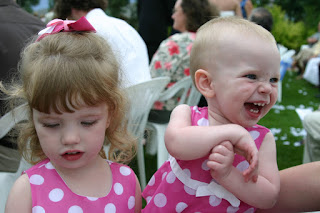 Speculation was brought to an end when the rumor was found to be untrue. It caused one wedding patron to shout... "Hey guys, there's going to be two kinds of cake and one is going to be my favorite, CHOCOLATE!!"


Having been granted traveling mercies we have returned to the farm. We attended a family reunion in Albuquerque and the wedding of Ralph and Chars daughter in Denver.
The same phenomenon recurred at the reunion as last time. Everyone appears to have aged a bit since two years ago, except Marilyn and I. We played some golf courses that were clearly over my head, ate salsa at every meal and told and retold family stories. A delightful time and a good reason to get together.
The wedding was delightful. We got to repay the Campbells for some of the help they've been to us over the years. We did some cooking, entertaining, and generally had a great time. The wedding was a lovely garden affair and the reception was in a hall next to the garden. All was nicely done and nothing was overblown. I'll leave most of the wedding news to Ralph. If he's too stingy with the pics...I'll have to get involved.
I'm looking forward to the next time we can get together with the Campbells.
The promised date for Blogstock '08 will have to wait a bit. Ralph is thinking the 4Th of July and I'm not sure. We just didn't have time to visit about that.
We had 1.25" of rain the night after we left and another 1.30" of rain the night we got home. If this rain keeps up I'll never get done irrigating.
I have often warned my kids to be careful not to pay too much for gas when pulling off of the Interstate in a remote area. On the way home Thursday we got off of the interstate at Cozad, NE. The BP station had $3.02 on their sign for 10% ethanol. Thinking this to be in line with what I had seen in Denver, we pulled in. The cheapest grade at the pump was $3.59!! I was mad and cancelled the transaction. We went 2 blocks further to the only other station at that interchange and paid $3.08. I had often seen the 50 cent range between stations before, but running a deceptive sign was stooping to a new low.
The weeds have responded to the recent rains quite well. If anyone is looking for me I'll be running my 8 horse, two wheeled string trimmer. Probably out around the grain bins. I'll stop by your blog soon. Come visit, we'll bake a cake.
Posted by Cliff at 12:04 PM 19 comments: 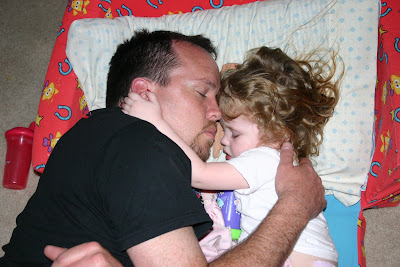 We attended a wedding in central Nebraska over the weekend. Part of our duties were to help watch this Grandchild during the reception. This is an older pic of her sleeping with her Dad.
She fell asleep in her little flower girl dress on the way from the Church to the reception. Just a four block journey. When Marilyn approached the sleeping child she said, "Ahhh, she's asleep already, she must be very tired." To which her Dad calmly replied, "Well of course she's tired, it takes a lot of energy to run her attitude."
************
I must appologize to regular readers of this blog. I've been really busy trying to keep corn watered and also with meetings and stuff to do relative to getting ready to leave the farm for a while. I will return with renewed vigor to this blog about the 27th. I will be gathering enough personal experiences to keep blogging for a while. I also hope to be able to give you a date for Blogstock '08. Don't give up on me.
Stay safe my friends.
Posted by Cliff at 12:59 PM 23 comments:

Golf, Life, it's all about the same.

Well my friends. I'm busy. But the golfers out there will understand my stupidity in golf league last night. I left a dead center Eagle putt 1 inch short. Nothing makes a better analogy of my life than that.
You don't spit into the wind or mess around with Jim, or for that matter do any other bodily functons into the wind, (if the wind is strong, down wind isn't good either) and you don't leave an eagle putt one inch short.
I've learned my lesson and if I get another chance at an eagle putt before my dirt nap...I won't leave it short.
Posted by Cliff at 5:33 AM 23 comments:

After a record wet month of May, we had one of the driest Junes on record. I've had trouble blogging because I can't sit down at the computer without falling asleep. We've been hauling irrigation pipe, planning Independence Day Celebrations, hauling hay, and mowing weeds.
THE FOURTH
We had a great get together. It included a Birthday party for one of my sisters, a surprise family baby shower for our youngest and his bride, and a few lady fingers and parachutes to fire off. Nothing says America like grilled hamburgers, hot dogs, homemade ice cream and fireworks from China.
We found the perfect compliment to Homemade Cherry Nut ice cream, it turned out that if you put a scoop of that on top of a scoop of Homemade Vanilla you had a combination that was hard to beat. We also had a chocolate cake for the birthday and a white cake for the shower. A great day indeed. My oldest son Dan and I finished it off with a quick nine holes of golf at just before sunset. He and I both had new fairway woods (metals) we wanted to try out. We came home and changed the sets on two of our irrigation wells, said our good byes and we collapsed into bed.
As a follow up to this. My 8 year old grandson ended the day with some 'delayed fuse' lady fingers. (not to worry, these fire crackers have the same power as cap gun with a two second fuse.) He was only allowed to light them with a punk. Punk, used in this manner, is a new word for him. He used up his last punk and was distraught because he had a few more to light at the end of the day and his Mom wouldn't let him use matches. Then yesterday, he found a couple of old punks in his Uncle Toms old room upstairs in our house. He came downstairs just beaming, held them up to show Grandma and said, "Look what I found Grandma, JERKS!" Apparently someone in this family, (ahem) uses the word 'punk' interchangeably with the word 'jerk' .
One last thing, I want to see if you think I'm correct. Last night my Daughter and I came into the house. We'd been hauling some hay and Grandma had the kids. They were watching a high def nature film. Fish were jumping out of the water. My Daughter said, look at all of those fish jumping. I told her, "I don't think fish jump out of the water on purpose." Then I imparted my theory on her. A theory I had developed thru years of taking the family camping and fishing at Harlan County Reservoir. I told her "Fish don't jump out of the water on purpose, I think they are just swimming upwards and suddenly run out of water, they then say to their buddies, Oh crap, AIR and turn around and dive back into the water."
They must have thought I knew what I was talking about because they all stared at me for a second and left the room. It seems that I often get the last word in these discussions. I think they are in awe of me.
Posted by Cliff at 3:44 AM 22 comments:

We've been planning the menu for the nearly 30 relatives coming for a visit on July 4th. Marilyn asked me today, "What do you think would go best with Homemade Cherry Nut ice cream?"
"A large bowl and a spoon," was my reply.
It must have been some kind of trick question because it turns out she didn't really want to know my answer. I always get that look.
Just see if I give her any of my candy from the parade. Yeah don't worry about me, I may not be fast enough to beat any of the little kids to the candy but I can still take it away from the Grandkids. For a few years anyway.
Posted by Cliff at 8:55 PM 17 comments: