I've Come To The Sobering Realization...

That the grey may not be premature.
Posted by Cliff at 8:15 PM 8 comments:

We had a regionally famous hardware store in our town when I was a lad. Jack Bros. was famous not for its large and spacious display areas but for the fact that it was a long and narrow store that held, well, everything a hardware store should hold. Their advertising slogan could have been 'Jack Bros., if we don't have it, you don't need it.' The ceilings were high, and shelving and merchandise went to the top on both sides. Display cases lined the trail down through the middle of the store and they served both the need for display and as a base for more goods.
Leroy Jack ran the store and knew where everything was. Most home town folks knew better than to look for something. You likely couldn't find it on your own. You were better off to just visit with those around you and wait your turn for Leroy to smile and ask if he could help you. He had a way of focusing on just the one customer he was assisting at the time.
You might ask for a battery powered electric fencer and then you'd follow him thru the store until he took a left turn and then a right and reached into the shelf under a cabinet. "What else can I help you with" as he handed you the fencer. If you needed the battery that went with it you might follow him somewhere else. He had a rope operated elevator in the middle of the store. He might have to go upstairs to retrieve the items you had asked for and you would watch as he ascended into the ceiling to return in a bit with your request.
I'm not sure how the rope worked. It looped down from above and he pulled one side of the loop to go up and the other side to come back down. It was a one handed operation using long strides with that one hand while the other hand held the merchandise. I thought it was magic at the time.
I don't remember if he ran charge accounts for customers. Whether he did or didn't makes no difference. You didn't need to charge because he had counter checks. This would be a concept hard to explain to the current day financier.
Most businesses had pads of blank checks sitting on the counter from area banks. I recall Leroy having checks proudly displayed from each of the banks in the region, even the counties surrounding Burt County.
If he knew you well enough he would automatically grab the pad from your bank, scribble in the amount, and all you had to do was fill in your account number and sign your name. I can still recall all of those blank checks on display, several rows of them, all from different banks.
If a customer said he needed to write a check Leroy would respond with, "What flavor?" meaning which bank shall we use. He told me once that he had asked a stranger from a neighboring town which bank he used and the man became indignant. "Young man, it doesn't matter which bank you choose, I have money in all of them."
I even remember being at the feeder auction at the Omaha Stockyards and having the clerk at the commission company pull out a pad of checks from our bank back home for my father to use to buy two semi loads of calves.
The problem with all of this was obvious and the county courts eventually began to fill with folks who had written 'No Account' checks to local businesses.
It was customary to write the checks for a few dollars more than the purchase and thereby use the local merchants as banks. Customers would go next door and eat hot beef sandwiches at the City Cafe using Leroy's cash.
The difficulty with that was if the person wrote a bad check and you gave him the merchandise and the extra cash, it was like paying someone to rob your store and go out to dinner.
Eventually the counter checks faded to under the counter for a few years and then the banks began to refuse them all together. Checks, after all, are and were no more than one man's word that he would or will be good for the money. I'm sure that if you were a businessman or a banker during that time, the changeover to personalized checks didn't come soon enough.
Today's methods are fairly secure with credit and ATM cards. They won't let you spend what you don't have. They also sometimes won't let you spend what you do have. I needed to say to my ATM card company recently, "Uh, my ATM card was just refused. Why?" My next answer, "I know I bought pressure washer parts in Omaha last week." Me again, "I know I've never done that before but my pressure washer has never had a problem before. Yeah, it was me who used the card and, by the way, thanks for turning the card back on."
Dealing with Leroy was easier and besides, he had that neat elevator.
Posted by Cliff at 5:40 AM 9 comments:

The words, "It's time for ALL Americans to begin paying their fair share" said in the most condescending tone imaginable, is meant to stir the Presidents political base.  It's to inspire those who don't pay any taxes, to keep voting for someone else to pay their fair share.
Recent numbers indicate that we are now up to over 49% of us who pay no federal income tax.
I would prefer that the president would just say it like it is. "I'll make sure that just a few folks will continue paying for everything and the rest of you can sit back, receive, and vote for me."
Then he could say, "I know that tax receipts aren't actually the problem but that spending IS the problem, but cutting entitlements would lose us votes so lets not go there."
One more thing, cutting the Payroll tax was the most ignorant move possible and points out the stupidity of everyone who voted for it. Yes it gave the employee 2% more to add to his paycheck but it took away nearly 14% of the available funding to Social Security, a fund that was already in trouble. Again this was done to buy votes.  Until Americans become educated enough to see through the fog and realize it's the spending, there is little hope.
Timmy 'Turbo Tax' Gietner said "Without more income, we'll be required to make uncomfortable cuts in spending." That proves they know what's right, they just don't have the guts to  do anything about it.
I can't wait for the change. In November. I hope we still have country by then.
Posted by Cliff at 5:49 AM 2 comments:

We've had Skype for some time. I use it once in a while with Ralph but not often. As a matter of fact about two months ago while I was experiencing computer trouble I had disabled it and anything else that wasn't necessary to the primary uses of my computer. An example would be bookeeping for our businesses and my writing and of course blogging.
Two evenings ago our son Dan called and said he had a new laptop with a built in camera and had set up Skype and kids wanted to talk to Grandma and Grandpa. I reactivated Skype as we talked and then he hung up and within seconds we had a call from him. 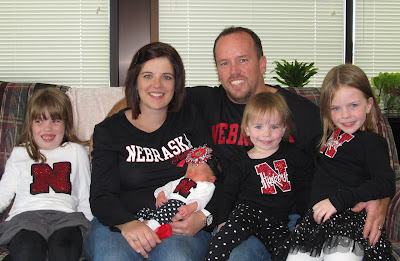 We were filled with a sort of deep satisfaction that even though we are 90 miles away from these 4 little girls and their parents we could, at a moments notice connect with them with both audio and visual. Our giddyiness was short lived  however as Dan and two of the girls sat in front of the screen and the kindergartner (the one on the right above) quietly asked her Dad after a good 2 minutes of converstation with us, "Dad, can we call someone else?"
Posted by Cliff at 3:27 AM 13 comments:

In Sunday School this morning we were studying in the book of Daniel and our teacher wanted someone to define the difference between the words 'To Know' and "To Understand."
A moment passed and I raised my hand and said, "I think most men 'know' their wives..."
I didn't get the chance to finish but I think I know why she avoids calling on me. I'm the little Billy in the back row.
Posted by Cliff at 10:43 AM 13 comments:

It's Snowing Here & Two Views From The Porch 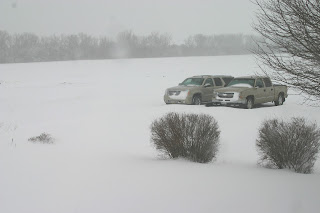 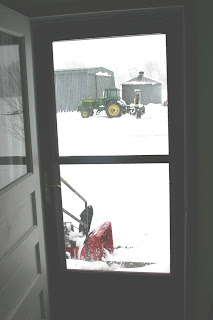 Everyone in these here parts have been readying themselves for a major snow storm. We won't be inundated as Ralph has been for the past few days but it will be bad enough. It does take me back to the stories I've read about the historic blizzards in our nations past and I'm always impressed by the pioneering spirit that storms brings out in the individual and me for that matter. This storm is no different. You prepare as best you can and then wait to see what problems come your way.
I have my new generator ready to power up and hook to the household current should necessity require, the 24" snowblower is by the sidewalk and ready and my big tractor has the 9' blower mounted, plugged in and ready. Turns out I hadn't planned on everything that could go wrong but I was able to persevere. The Directv Satellite dish became covered with so much snow it quit working but I sent Marilyn out with a broom to clear it. If you keep a clear head there's no major problem a guy can't think his way through in times like these.
Posted by Cliff at 12:33 PM 15 comments: