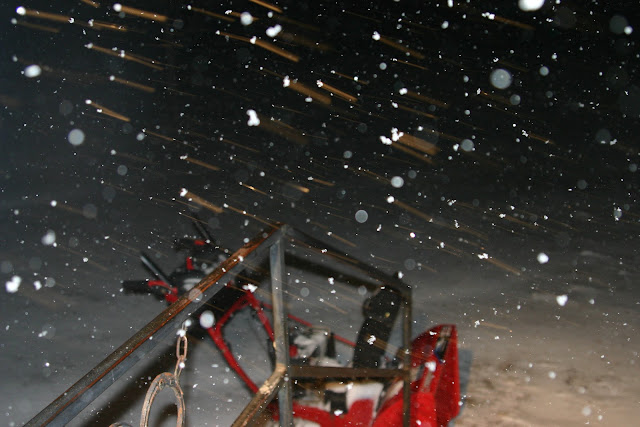 This pic is an addendum to the post. Marilyn snapped it without flash during the snow storm. The light was from the porch light. The near blizzard conditions never materialized. It was actually just normal Nebraska weather for the second month of the year.

We're waiting for the other shoe to drop. About a week ago the National Weather Service began forecasting a near death experience storm to pass through the area. Today it arrives and like most winter storms, it's going to depend on where you live. The two feet they began forecasting for this area has dwindled steadily down to what is now 8" for later today. I do know there is a major event south of here with the two feet and an inch of ice. It makes our forcast look pretty tame.
Todays agenda includes plugging in the engine heaters on the snow blower tractor and the emergency farm generator tractor, putting the semi tractor-trailer inside and unload the srap lumber in my pickup into the burn pit. I must attend a 9 AM meeting at the courthouse and then we'll count our blessings.
Posted by Cliff at 5:19 AM 6 comments:

Why I Prefer The Embassy Inn and Suites

On January 12th, we passed the 125th anniversary of the Blizzard of 1888. I’ve read varying accounts of the storm and about the devastation it caused and about the horrible tragedies, death and heartache. It hit on a day that started out calm and unseasonably warm and struck with hurricane force winds that continued on for days. The temperatures dropped from near 30F to in some cases, -40 degrees below zero and it deposited nearly 4 feet of snow in the time span of just a few hours. The winds were so strong it blew the roof off of barns and school houses and left many trapped or pinned down right where they were when the winds hit.  Some school teachers were considered heroes because after losing the roof to the building, they led their students to the safety of a neighboring farmhouse.

Of the 235 people who lost their lives in the storm, most were school children. Other folks died within a few feet of their home, unable to find their way in the blinding snow and unable to hear loved ones banging on pans from the porch. It’s worth taking the time to find and read the accounts of that storm. It points out the fact that when Mother Nature throws her best punch, we lose.
I recall a storm we witnessed firsthand. In the late 1970’s we put afloat with several families and boats from near our place on the Missouri River in route to near Ponca Nebraska. We were going to caravan (or would that be (boatavan) up stream to camp, fish, and basically carry on with family activities on the banks of the wide Missouri for 2 glorious fun packed days and nights.
Our armada was beached all in a neat row that Friday night, in what turned out to be a sandy beach/picnic area/cow pasture. The cow herd left us kindling for the fire but none ready to use on that trip.
We pitched our tents and the volleyball net. I picked the beautiful spot for our tent that we were sharing with friends.
We ate supper and the sky turned nasty looking. It was bedtime soon after that and we all bedded down in our tents because it was beginning to rain and it put the fire out. It began to rain very hard. The winds came up and the lightning was ferocious. The river where we were camped wasn’t too wide. I would guess it to have been maybe 200 yards wide and there were several strikes within a quarter mile of us over the next two hours. At about midnight my friend on the other side of our big tent said, “Cliff, push down on the floor of the tent.” I did and it felt like a water bed. I had to push down about 7 or 8 inches before I could feel the ground. We were in trouble. We and our wives were in more trouble than the others. My choice spot was actually in a depression caused by rain water running to the river. We bailed out of our tent and everyone headed to try to save their boats that were all sinking from the rain water. Five gallon and minnow buckets were pressed into frantic service. All of this scooping action went on as the lightning intensified. When the rain finally quit, some of the runabouts had their tops and storm covers put up and the kids and an adult were moved from the soaked tents to the interior of the wet boats. Most of us spent the rest of the night huddled around a fire trying to dry our clothes. It didn’t work. Dawn finally broke after what seemed to be an eternity and we began loading 50 pound sleeping bags into the boats, along with even heavier tents, coolers and unused food and we said good bye to our glorious weekend retreat. We’d all been up 24 hours to that point and we had to navigate muddy, turbulent water to try and get home. The two hour trip home took nearly 5 hours. We had to steer clear of picnic tables, large cottonwoods trees, old sows, steers, footballs, and 55 gallon drums all churning in what appeared to be chocolate milk.
We got home to read that the storm that night dumped over 7 inches of rain near Ponca in a two hour period. We could attest to that.
Lessons learned that night were many. One neighbor sold his tent and vowed never to sleep on the ground again; and he didn’t. I vowed to pick spots for my tent that were a bit higher than the surrounding terrain. My other big lesson for camping in the rain was to get up at the first sign of a storm and keep your bedding dry. Then you can go back to bed.
But the biggest lesson of all is that Mother Nature always wins the big fights; all we’re ever left with are the stories.
Posted by Cliff at 7:28 AM 2 comments:

This Is A Great Speech...

By a great Man. I wish he were President.
His level of intelligence and understanding of society were clearly far above and beyond anyone else in room. He dwarfed everyone. I can see why this wasn't covered by the mainstream media. It didn't match their agenda.
http://www.youtube.com/watch?v=OQfGm919A9o
Posted by Cliff at 8:07 AM 5 comments:

Failure should be our teacher, not our undertaker.
Failure is delay, not defeat. It is a temporary de-tour, not a dead end.
Failure is something we can avoid only by saying nothing, doing nothing, and being nothing.
~Denis Waitley~
Posted by Cliff at 7:17 PM 4 comments:

where Punxsutawney Phil is accurate only 39% of the time. No wonder we wait for his prediction. He's more accurate than the people we've been using.
Posted by Cliff at 6:05 AM 6 comments: