Learning To Drive On The Farm

I've been driving a long time. I can't remember the time I didn't know how to drive. It started with a 1940-something, Willys Jeep. The brother next oldest to me in age, by four years, taught me how to start, shift and steer the old rig. He was about 11 at the time. You're right, I was pretty young but it was in the days before the words "child endangerment" had been thought of and I was the last of seven children spread out over nearly 20 years. Looking back I don't think it was some kind of evil plot to reduce the number of children in the family but rather it was the fact that kids who could drive were handy.
My dad was pretty disgusted the day he found out that I'd been taught to drive. He had the Jeep sitting along the lane where it was being used to pull a wagon full of seed oats. He was alternately seeding and walking back to get the wagon. I pulled it up for him and he came unglued.
"Who taught you how to drive?" He already knew, but parents are required to ask questions they already know the answer to. "Well, don't do that kind of stuff again and while you're here you might as well pull it up; count off about 10 fence posts, and then shut it off.
"And don't slip the clutch."
From that point on I learned to find things to do that would require the Jeep and a driver. One was driving around the farm delivering lunch. Lunch back then meant the two breaks between breakfast, dinner and supper. The problem being I wasn't tall enough to be able to see out any of the windows. The old Jeep had a full cab and a vent door that opened wide, in the center of the dash. It was just below the windshields and that allowed me to lean to my right and see what was coming.
Our cocker spaniel, Taffy, always accompanied me and would sit in the passenger seat in the upright position. Yes, she sat up and leaned back like a human, and that made her taller than me and so she could see out. She was looking for rabbits and I was straining to see through the hole in the dash to see what was up ahead. I think she liked the way I drove because she never said anything about my driving. To this day, my older siblings remind me that they knew who was driving when they saw the Jeep coming with no apparent driver and a dog in the passenger seat. I'm sure it looked like a rural mail carrier dog.
I soon graduated to an Oliver 77 pulling a spike toothed harrow with all of the warnings that went with that and of turning too short on the end of the fields. I was soon raking hay and doing anything and everything else that required a child who knew how to let a clutch out without burning it. Looking back I probably should have stayed in the house and watched black and white TV on one of our three channels. Life got pretty busy for me after I learned how to drive.
I was seated in the back with the dog the day Dad taught one of my sisters how to drive the Jeep. She was probably about 13 at the time and I was the "smart aleck" little brother who already knew how to shift that vehicle. I watched as Dad carefully explained about giving it a little gas with your right foot and letting the clutch out with your left. "Not too fast…but not too slow either."
The Jeep was pretty short in the available torque department so it had a tendency to lurch and almost die and then lurch and then almost die again, causing the driver to also violently go back and forth making the problem with the pedals even worse. Over and over this went on while Dad practiced patience, something he had very little of, and he sat back and got out a cigarette and his lighter.
The lighter he had back then was more like a hand-held bonfire. When he would spin the wheel the entire top of the lighter would be engulfed in flames. He held it carefully by the bottom of the lighter. I know it didn't work correctly but it was effective in a strong wind. While my sister was trying to keep from killing the Jeep, Dad's hands went back and forth with the jerking of the Jeep while the fire licked his eyebrows and eyelashes, and the flame even temporarily cured his nose hair problem. It was the only time I ever saw Dad get a cigarette out, try to light it, and then put it back in the pack.
I've since decided that in these days, teaching young children to drive is not a good idea if you're concerned about the child. My reasoning comes from what my mom told my wife when she drew her aside almost 40 years ago and whispered, "Whatever you do, don't let either one of those two men teach you how to drive a truck. You'll be driving one the rest of your life." My wife took the advice to heart, so I taught my daughter how to drive the semi. You can't start them too young.
Posted by Cliff at 3:52 AM 16 comments:

I think this article is a must read. Just one page. It'll just take about two minutes but you'll be glad you did. Go have a look. It pretty well explains why I've always been a fan.
Posted by Cliff at 4:40 AM 12 comments:

Like the Federal Government, the people of California have been scoffing for years at those who have said you need to be careful not to spend more than you can pay for.
It would seem the grim reaper is honing his cutting edge with the State of California in his sights. I hope the citizens of the state take a look at their local governments and schools as well as the state house, decide who has been in charge while this wild spending spree took place, and then vote the bums out.
The same will apply for the rest of America in November. Paying everything, for everyone, is a cute way to get votes but the day of reckoning always comes. It can't be avoided.
I would reject any attempt of the feds helping the states out.  They are facing the same problem of wild spending by an out of control regime, with no one to hold them accountable.
I think having a space for a garden and enough room to raise a couple of hogs will eventually pay off for those who do.
Posted by Cliff at 12:07 PM 11 comments: 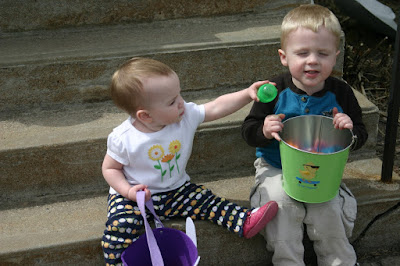 "Okay girl, I don't care if you are my little cousin. I'm going to count to 3 and when I open my eyes, that green egg had better be back in my bucket!"
Posted by Cliff at 6:26 AM 10 comments: