I Had A Great Blog Planned...

and it was going to include a movie from my sons' phone. But I couldn't get it sent to me so I'll tell you all about it.
The new Grandson pictured below, Boston, rolled over on his 13th day of life. Dad was sure he'd placed him face down on a blanket in the living room and went to the end of the hall and when he returned, Boston was on his back.
"Wait a minute" went through Tom's mind and  some doubted the story until Mom yelled two days later, "Tom, come here, he did it again." Tom rolled the baby to his stomach again and immediately the baby rolled to his back so Tom got his phone out and sure enough, filmed him rolling over for the third time that day, on his 15th day of life. He's been doing it regularly since.
A bit early for this I'd say.
But on the other hand, he still isn't talking yet. cm
Posted by Cliff at 9:05 PM 11 comments:

Yesterday In A Grocery Store Far From Home...

Well it was 70 miles from home anyway, I saw a senior citizen coming down the aisle toward me.  She was pretty ordinary looking and she shuffle slowly along the aisle as though her plan was to make this shopping trip last all afternoon.
The message on her T- shirt caught my attention:

I have either a finely honed sense of humor or it's 'sick' humor, but I laughed on and off all afternoon about the shirt. To me, the funny thing isn't what is said but it has more to do with who said it.
Posted by Cliff at 12:42 PM 7 comments:

This is pretty exciting. It's before noon, and I've been outside loading a truck. The only outer wear I had on was a pull over sweatshirt. I feel as though I've been set free.  I don't know how warm it is but we're contending with mud so it must be above freezing which is just as good as 75 degrees to those of us who have been living in the locker plant for the past two months. I did hear 50 degrees plus, for a high in our forecast. Now, where's my speedo. (it was a joke so knock off the laughter)
I took this picture with my phone which isn't too good at sunlight stuff but I liked it just the same so here it is. Beautiful Nebraska. That isn't snow on the ground, it's the white that's left over after the snow melts. 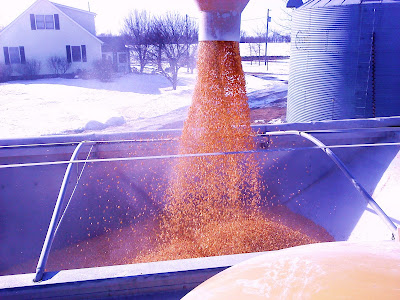 This being Valentines Day, my wife and I exchanged pleaseantries today and then renewed our vow to each other as we are in the middle of our 40th year of wedded bliss.  Actually we've agreed to stay married to each other so as not to run the risk of ruining two other peoples lives.
Posted by Cliff at 9:48 AM 9 comments:

We find ourselves, once again, in winter's icy grip. There is no cute little name for this. We have the hazy, lazy, crazy days of summer; the dog days of summer; and cool crisp fall air but all January can give us is someone quietly singing to themselves, "Let it snow, let it snow, let it." … That's about all that gets out of their mouths before someone yells, "Hey! Why don't you shut your pie hole?" Yeah, nerves get on edge this time of year.
It seems that what should take 30 minutes to accomplish in July or August could possibly take at least all day or maybe two days this time of year. One mental error can slow you down significantly. Forgetting to plug in the block heater on a loader tractor, for instance, can cost hours of delay. A tripped breaker can have you off chasing electrical problems and frozen cattle waterers or bring you to the realization that you now have two tractors that won't even consider starting until after lunch. Just after lunch is the time you're supposed to be at the pesticide training session that won't be offered again until Monday, 200 miles from here.
The cold tends to freeze things in place, like the time I was hauling a wooden feed bunk with the loader and had to tell my dad that "we'll need to go back next spring and get the legs for this bunk, they're still out in the feedlot."
Aging has a huge effect on farmers and the winter cold. I've found that even at the age of 60, things I used to take for granted have to be planned for because of poorer blood circulation. Extra layers of clothing and mittens and boots and facemasks and stocking caps are necessary, and oh yeah, a stepladder to help you get into the cab of your pickup.
My buddy Paul related to me that a phone call to friends on a farm in North Dakota had revealed that we really don't know what bad weather is. They had had three feet of snow and high winds for days. The farmer said it was a sad situation and that his wife had just spent the entire day staring through the kitchen window. He said that at about sundown he began to feel sorry for her and let her in. I'm very aware that entertainment is hard to come by out here on the farm but that's something I'm probably not going to try. Marilyn didn't think it was a funny story, I didn't either and quit laughing immediately.
I do look forward to late December and January because of all of the college bowl games and the NFL playoff schedule. I got on the Internet and found a schedule of all of the games as well as a listing of the central time zone start times and what channel they would be on. I carefully set each one to record and told my wife I was set to finally "be a man." I'd be able to watch each game without interruption. My wife said, "Yeah, you'll get four hours of uninterrupted sleep during each game, that should be great." For some reason Jackie Gleason came to mind, "One of these days, to the moon Alice."
Through the entire football schedule I have also come to realize that I have marketable skills. The folks in Las Vegas will be praising me for my abilities some day. What are the chances that out of seemingly 50 or 60 games, I would not be rooting for one winner.
I will now make a prediction based on my vast knowledge of pro football. (ahem) Now keep in mind that I'm writing this before the last two playoff games so I've no idea who the teams are that will be playing in the Super Bowl. I'm pulling for Green Bay to win the Super Bowl. That information, knowing that I'm rooting for the Packers, can make you more money than knowing when the price of corn is going to peak. Place your bets.
Now I have to go unlock the door for my wife.
Posted by Cliff at 10:02 PM 14 comments: