"Hands Where I Can See Them Ladies!"

One of my sons just called to say he'd gone to a gun show in Lincoln this morning with his two young sons in tow. The facility is a sprawling event center out on the edge of town capable of hosting two or more big events.
Today they had the gun show and the other show was a giant craft bazaar.
He said the State Patrol had a presence there, but not at the gun show, it was for the craft show.
The boys have friends who are policemen who have told them that on a traffic stop, they know before approaching the vehicle whether or not the owner has a concealed carry permit. The policemen also say they don't mind those stops. The well trained nature of concealed carry permit holders means they know and follow the rules. They know the first words out of the mouths of the drivers will be, "Officer, I have a gun in the car."
It's not concealed carry permit holders or the gunshow attendees the cops are worried about. There are no amount of laws that will affect the people they are worried about, those people don't follow the rules or the new laws sent down from Washington.
By the way, I'm fat, so I want all forks and spoons banned.
Posted by Cliff at 2:42 PM 3 comments: 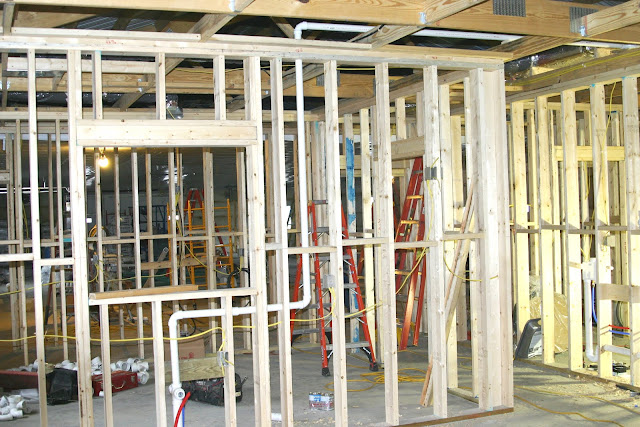 I took a bunch of pictures of the inside of the new kennel and then realized they all look the same. They were all similar to looking at a row of me standing there. You know, a bunch of studs in a row. So this is all I'm putting up. The pic above is of the break room taken from the grooming area. The HVAC and plumbing and electrical are mostly all roughed in.  The pic below is deceptive because from where the camera is located to the other end is 73 feet and it just doesn't look that far. That part of the ceiling is finished and insulated. The two hanging wall heaters will be used to heat the 'outdoor' part of the building. 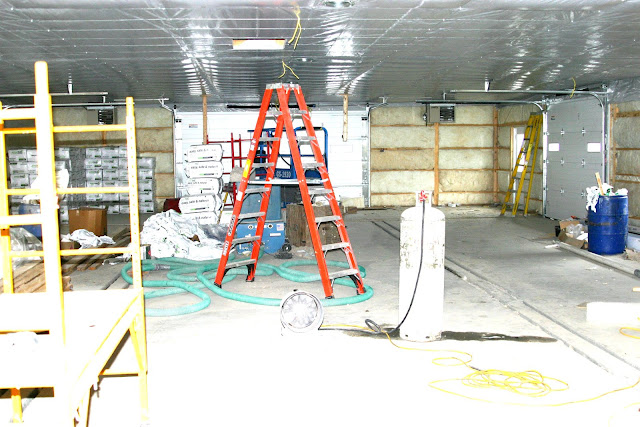 We all gathered at our Son Tom's new house for Christmas Dinner. It was melancholy at best without Great Grandma being there but we carried on. 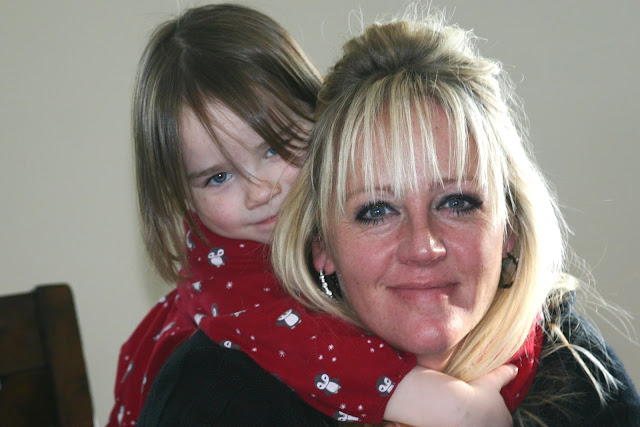 This is our Daughter Juli and her niece Georgie. That of course would make Georgie Girl one our 5 Grandaughters.
The next two photos got hooked together by Blogger so I'll describe them from here. The top one is our buddy Ralph with one of my daughter-in-laws after the funeral on January 5th, and the bottom pic is of another Grandaughter, Danica, who found Christmas day much, much to long for her taste. 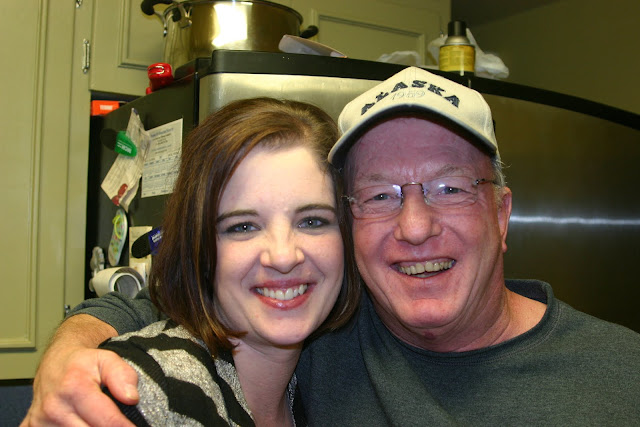 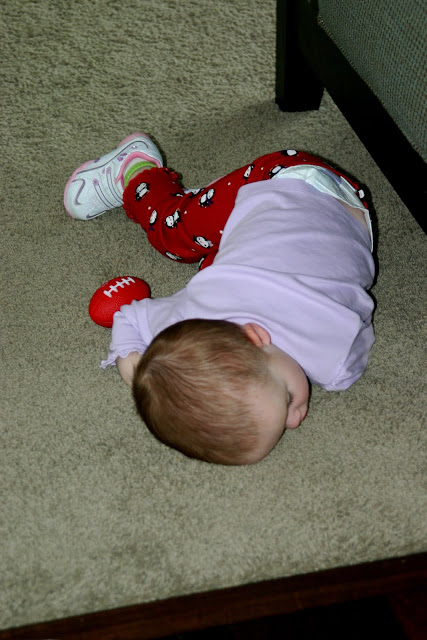 Note: The reference to McPherson Kansas in this post may seem out of place but the magaizine this was written for covers all of Nebraska and Kansas.

McPherson
This has been a grueling Holiday Season for the Morrow’s.  Marilyn’s mother passed away just before Christmas and it was quite unexpectedly. It was complications from emergency surgery so our opportunity to prepare mentally for all of this was short. I guess we’re never prepared for such things but it’s hard to think that the head of our family has been cut down. She was the singular head because my parents have been gone many years, Marilyn’s Dad died mid 2012 and that left Maddie as the sole surviving Matriarch.
G G was 91 years old. She never could grasp the thought that she was old enough to be called Grandma but Great Grandma was the last straw and G G was her idea to avoid having to hear the words “Great Grandma” from 13 little renegades.
Maddie was fearlessly proud of her Scottish heritage. She was born Madeline McPherson. She was a card carrying member of the McPherson Clan and had traced her lineage deep into Scottish history.  Her family tartan and crest were proudly displayed in her abode and was eager to talk about them.
Maddie and I butted heads sometimes. Okay often. Well, really it was nonstop from the day we first met back in 1970. She always had a singular focus and wanted things done ASAP and I did did them for her but usually not soon enough.
She moved from Denver to be near me, (or maybe it was my wife she was moving to be near) in 1995. That’s when we really began to know each other.  She had a keen sense of humor and cutting wit about her. I once called her at night; I was trucking near Wichita Kansas and explained that I needed a phone number from back home. I told her I was driving and couldn’t write the number down. She came back with “Cliff, here’s the number and it’s so easy, even you will be able to remember it.”  She laughed, I didn’t.
Other times she would get her jabs in early. She was always glad when I came for a visit but she would sometimes open the door, and then say in a disappointed tone, “Oh, it’s you.” But she did it with a smile and then invited me in.
She moved from Denver to our small town, and just like her daughter, completely embraced this farm community and the people. Maddie dove head first into her church, her bridge club, quilting group and those with whom she dined. She seldom missed concerts and recitals and grandkids at sporting events and as well as 4-H shows. She was quite proper about all things and kept her appearance up right to the end. Like her Father and Grandfather she was fiercely independent, completely organized, and documented her life in diaries and when the funeral arrangements were made they were made well in advance, by her.
She had a special place in her heart for McPherson Kansas that bore her maiden name. Marilyn took her mother down to the ‘Highland Games’ there in central Kansas. For those unfamiliar with them, the Highland games are athletic events originating from ancient Scotland.  They involve many events that require brute size and strength.  Like throwing what appear to be telephone poles so they flip forward away from the thrower. The poles are big enough to require a power company truck to perform the same stunt if you don’t have a Scotsman handy.
They also throw BIG hammers for distance, and heave stones over standards set quite high. I would tell Maddie that the show of strength by these guys were pretty amazing especially for some guy in a dress. The comment was meant to get a rebuttal and did. Immediately. “Cliff, those aren’t dresses, they are kilts, and by the way it’s pronounced Mc-‘fur’-son not Mc-‘fear’-son. So of course I always used the latter. But she loved the pageantry and rituals of being Scottish.
As a sidebar, I suspect the Highland Games in McPherson, KS are sponsored by the local hernia specialist.
In the game of gotcha that Maddie and I played with each other, I was always behind and trying to catch up.  Her ‘coup de grace’ for me was the time I took her to a Robert Burns banquet (famous Scottish poet) and she had me unknowingly try ‘haggis.’ I’ll not explain the ‘delicacy’ just in case you’re dining while you read this, but suffice it to say ‘she got me.’
Every place we went in our home town we’d hear, “Wow, you’re Mom is really something Marilyn.” Well, she was something. Trusting me with her daughter the past 41 years was top among my reasons to agree. Maddie, on the other hand, would have told you that very fact just showed a lack of sound judgment on her part.
But only if she thought I was within earshot.
Rest in peace my friend.
Maddie   1921~2012
Posted by Cliff at 6:38 AM 9 comments: 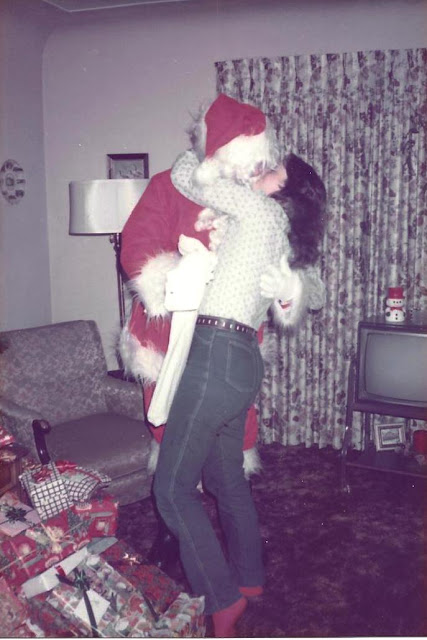 We've been going through some old family photos and found this picture of Marilyn and Santa. I have now ordered DNA Testing on my 3 kids.
OR...it might have been the year Santa brought that new Crosby Prix de Nations english flat saddle to her as a gift.