Rumors of My Death Have Been Greatly Exaggerated!

With apologies to Mr Twain for the theft of his wording........
Yes it's been a while since I last had time to post. We have been oh so busy with harvest. I have some corn to move around yet but it's 'all on wheels'. That's a farmer term meaning the crop has all been picked but as yet has not been unloaded from the vehicle it is in, ie, a truck, combine, wagon or what have you.
Yes we're done. It's officially 'too late' to be picking corn.
The weather is glorious. I love this weather and it is the main reason we stay in Nebraska. October and November weather is the reward for staying here year after year and letting nature take her little pot shots at you like drought, too much rain, heat, cold, rain, sleet, snow, ice, humidity, tornados, and on and on and on.....
We are getting to thirty something at night and about 60 for a high during the day. It's 'where's my sweatshirt?' weather. Every morning you must rerun yesterday's activities to try and remember where you were when you suddenly got too hot and shucked your coat.
The grass is still green, the fields are reduced to light brown stubble, and the leaves are all changing colors and the air is so very crisp in the mornings. It's hard to get enough of it sucked in when you first step out in the morning. The air, and the way it smells, strikes me and makes me think the same thought each morning. "It would appear I've gotten away with it." 'IT', being living on the same farm since I was born and being able to see nothing but land and trees and crops and family members and those blasted deer...and little else.
Except for deer season, Marilyn and I get up and walk to the door to see who drove in. We will sometimes go weeks at a time with no traffic at all by our house. It is a long private drive with little to draw folks down to our house, except hunters, who help us control the population of the little hood ornaments.
I'm mostly saying that we are blessed. It's been a good harvest, everyone finished with the same number of appendages they started with, and I was lucky enough to have 3 brothers who come back (or out) to the farm for harvest, to help me each year. The stories abound, the food is good, very good, thanks to Marilyn, and we set a record for this farmer, getting his crop out this early.
There is a lot of field work and record keeping to do, but for now, the sun has set on the great crop of 2006. 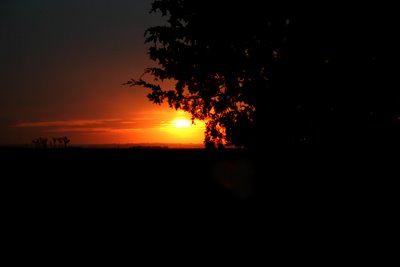 I received an e-mail today from Cabella's. They have put their 'performance underwear' on sale. They wanted me to know that. I thought that I should probably go look. But what kind of performance would ensue. Am I obligated to do something. A song and dance maybe? What if I bought my wife a pair. Or better than a pair...just one. Now we're talking. I could stand a little excitement out here on the farm. We really haven't had anything to get the ol' heart started since, well, since we burned the barn. And we did that on purpose.
Okay, I chickened out. I didn't go look at the website with performance underwear. I just can't take on another obligation right now. Yup, too much pressure here.
I wonder if they come in brown.
Posted by Cliff at 7:45 PM 25 comments:

Rats Are Smarter Than People

We (my Brothers and I) got into a discussion a few days ago about the effects of rats on farm buildings. We don't have trouble with mice or rats around our home farmstead because of the 30 or more cats we feed out by the barns. I do have 3 remote sites, one with a machine shed, that have rat problems. I have spent a small fortune buying different kinds of baits in an effort to plan their demise.
Rats are hard to kill with bait because when the first rat dies from the poison, the entire colony quits eating whatever it is that they've been eating. And I mean they quit eating it forever. That's why rat killing formula's are slow acting in an attempt to get them all to eat before they learn about the problem.
That's why I said to my Brothers, "Rat's are smarter than people, when rats figure out that what they are eating is killing them, they stop eating it."
I was going to give you an analogy here but I don't have time, I need to go fry a Twinkie for breakfast.
Posted by Cliff at 4:22 AM 18 comments:

My Troubles Didn't Start Until I Was Born! 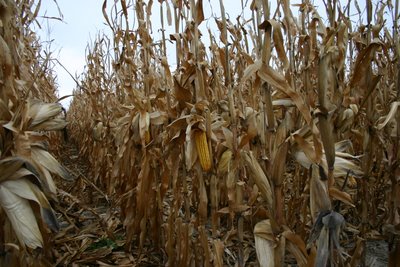 When I started to attend our little country school, the girls all made fun of my big ears and the way they stuck out.
Now that I've gotten old, they're still big...but now, as you can see, they hang down.
Posted by Cliff at 5:06 AM 18 comments:

Marilyn went deer hunting Monday night.
With her car.
She got one.
If the impact hadn't killed the deer...the twenty foot fall from the sky would have.
Marilyns fine. Mad.
The van isn't fine.
Morrow Collision Center will take care of the van.

A View From The Back Porch 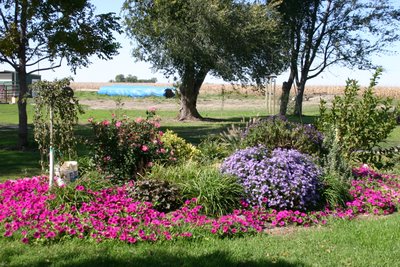 Marilyn snapped these two pics a couple of days ago. The fall flowers have taken over her berms. Below is a close-up of the Aster. It is usually full of butterfly's and honey bees. It's a fairly high resolution picture so if you look closely you can see all of the bees at work.
In the background of the above picture you can see the corner of one of the horse barns, the blue tarp protecting bales of hay and the corn that is nearly ready for harvest.
I suppose I should try to get a couple of shots of harvest. We're about 1/2 done harvesting the soybeans. 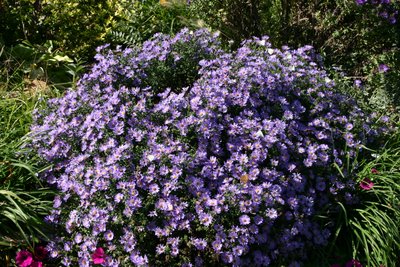 I have been to two concerts this year. One was a local concert that drew some big name country stars to right here in Tekamah.
Last night we were treated to the River City Roundup rodeo and the concert that followed. The River City Roundup in Omaha is similar to the Denver Stock Show and is better in many ways. We saw Jennifer Nettles and Sugarland. Unbelievable talent this girl has.
An observation of mine from both concerts. Loud music makes some women in the audience stand up at the beginning of the first song, raise their hands into the air and move them from side to side and they sing and sway with the music as well as moving their hips in a suggestive circular manner. They do this from the start of the concert, all the way to the end.
I want to state here and now for the record, that if loud music made my wife stand up, wave her arms from side to side and move her hips in a circular, suggestive motion... I would buy one of those big, loud stereos.
Posted by Cliff at 6:13 PM 16 comments: