Time For A Progress Report On The Kennel 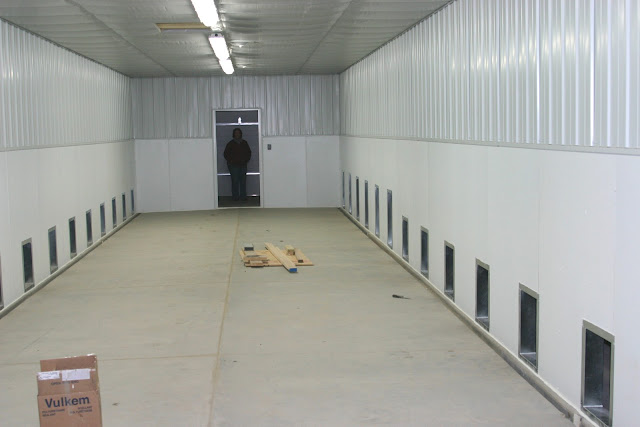 To avoid the frustration of making the pictures go where I want them, I hereby accept the order in which they fell. SO....we'll start in the back of the building. This is the kennel area. This indoor area has forced air AC and Heat, and zoned by itself. The cement slopes to the wall where there are several drains. This allows for more efficient sanitation with our pressure washer. The dogs can go out the doors to the area below. Okay the next pic isn't what I thought. The outside picture is the last picture. 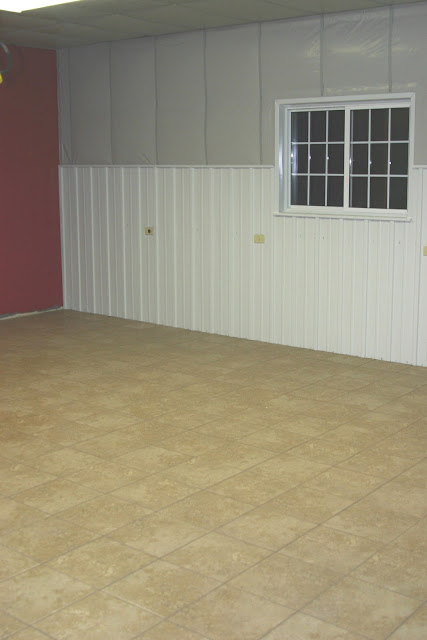 This is part of the 'wash' and 'blow dry' room. There are 4 heavy duty electrical circuits on the far wall for big dryers. 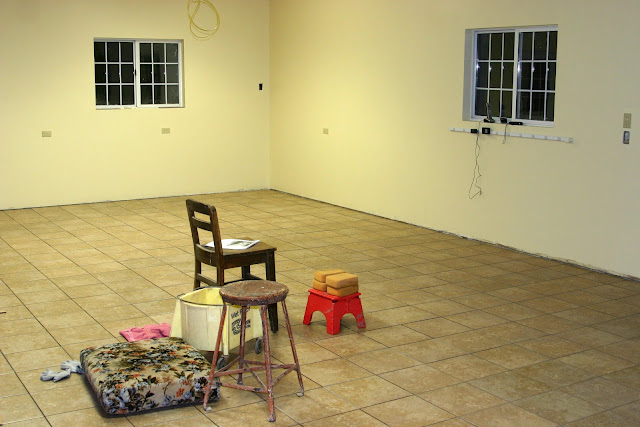 This is the reception and grooming room. The front door is just out of sight on the left. All of the tile was installed by my sons. It is completely flat and the lines are laser straight. It would seem to me that if you are talented in auto body repair, it also qualifies you to do almost anything that requires artistic talent and a high level of craftsmanship. Many parts of the trades industries are like that. 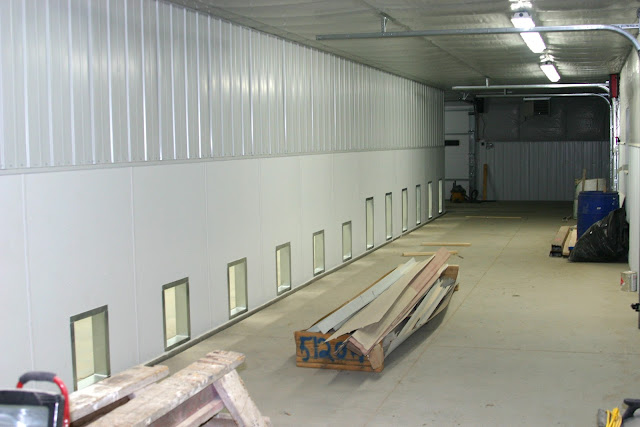 This is going back again to the back of the building. This is the 'outside' area of the kennel. This too, slopes to the wall for cleaning. There are 5 big garage doors surrounding this inner building and they can be operated by remote control from our house. They will be open in nice weather and closed in bad. This area has two hanging heaters to keep it warm in the winter to aide sanitation and keep snow at bay during snow storms.
Posted by Cliff at 5:42 AM 7 comments:

There are often two ways to pronounce common words. As a matter of fact we hear them pronounced those two ways so frequently that we don't realize what is being said. The locals will often do it in regard to our hometown of Tekamah. Sometimes it's "T-kay-muh" and sometimes "ta-KAY-muh." The story goes that it is an old Indian name or that it might be a misspelling of a town back east when the group of men gathered to lay out the town in the mid-1850s. They drew the name out of a hat and one of the men was from the eastern U.S. No matter how you say it, we all know what is meant and give no thought. There are no authorities on the subject.
Mispronunciation can have its downside as my friend Kevin found out many moons ago. Unlike myself, Kevin was a town kid and had all the advantages of the city school, including a teacher named Mrs. Valder. Mrs. Valder retired just before I started making the trip from "Tobin School" to the high school in town. Mrs Valder was famous for being a hard core English teacher. She was old school but not mean as she was often judged, but rather focused on perfection. Everyone learned to diagram sentences, proper pronunciations, the rules of punctuation and of course that generally speaking, a preposition is the wrong word to end a sentence "with."
Now back to Kevin, he became a successful carpenter with several employees. He had all of the staff and talent to take any project from planning to completion, no matter the size. As is the case with many professions, the big jobs are sprinkled with pesky little jobs that need to be completed to maintain your good reputation in a small town. Thus was the case when Mrs. Valder left word at Kevin's shop that her roof was leaking somewhere on the south end.
Kevin didn't want to take any of his help away from the big projects and so called on Mrs. Valder himself one morning.
He was in a hurry and so when he arrived he immediately went about setting up a ladder and went to the top of the house. The roof was generally in good shape but the chimney drew his attention instantly and sure enough there was a problem with the flashing where water could run down the chimney and get into the house. Luckily for Mrs. Valder, it was a small problem that he could fix fairly inexpensively.
He climbed down and knocked on her door. She was very happy to see him and after exchanging pleasantries, he said, "Mrs. Valder, I've already been up on your roof and have found the problem. It's. ..."
She put a finger in the air and interrupted him and said, "Kevin, it's pronounced roof, (like the 'roo' in kangaroo) and since Kevin thought that was how he pronounced it he gave a nervous giggle and said, "Well anyway, I've been here for a bit and already set a ladder on the south end of your house and I climbed up on the roof. ..."
Again she interrupted him, "Kevin, it's roof, now say it." He smiled, she didn't. "Say it, Kevin, say 'roof.'" After a pregnant silence, she again said, "Say 'roof,' Kevin, the way you're pronouncing it is close to what a dog says. Now say 'roof.'" Finally Kevin realized that he was in way over his head and said "Roof." She smiled, relaxed and said, "There, that's correct Kevin." And then she went about lecturing him about how he was a bright, well-educated young man and that there was no need for him to butcher the English language like that.
Kevin said he left the house a lot smarter and with a smile on his face. He knew at that moment that Mrs. Valder was no phony. All those years of school teaching and demanding that everything was correct were not for show, she was a true believer in education.
I've often thought of this story and Mrs. Valder. She was a true educator. Not unlike many of our teachers of today. Without those "tough" types our society slips a bit every day until another "stickler" shows up and raises the bar back to the top.
Or should I say through the roof. Err..I meant roof.